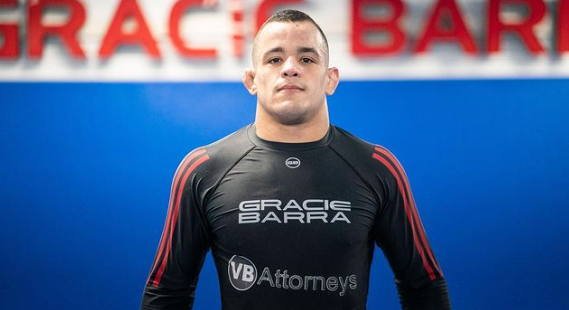 Pedro Marinho wants to challenge himself against the absolute best grapplers in the world.

On November 11, he’ll have a chance to do just that when he defends his Who’s Number One (WNO) light heavyweight title against newly-crowned ADCC champion Giancarlo Bodoni.

Marinho recently spoke to Grappling Insider about his upcoming title match, his takeaways from the 2022 ADCC World Championships, the power of the guillotine, and the difficulties that success can create.

Like Bodoni, Marinho also competed in the 88 kg. division at ADCC. But after suffering a loss to Vagner Rocha in the quarterfinals of his weight class, and one to Tye Ruotolo in the opening round of the absolute division, he was disappointed.

Without wasting a moment, Marinho immediately contacted FloGrappling to request a match against either Bodoni or Ruotolo:

“After he won ADCC, it was the first match that I asked for, for FloGrappling… I want to fight Giancarlo, that won my division, 88 [kg], or Tye, that beat me in the open class, for the belt…

“I think it was the same day, the same day he won, I already sent a message to Ricardo [Ammendolia], telling them that I want to defend my belt this year against Giancarlo or Tye Ruotolo.”

Rather than look for an easily winnable match for his first title defense, Marinho picked Bodoni for one, simple reason. He is the best.

“Giancarlo’s the guy right now. He just won ADCC, 88 kilos. It was an awesome performance. I just want to fight the best guy out there, the best challenge you have. I want to prove that I’m the best guy.”

Marinho and Bodoni have faced each other twice before in competition, first as purple belts in the gi, and, most recently, as black belts in no-gi. Bodoni won the first match, but Marinho submitted Bodoni in their second encounter.

Marinho says their third match will come down to who has improved the most over the past couple of years:

“Now he focuses 100 percent on competition. I think that’s what has made him improve so fast. He’s a tough guy but like I say, I proved a long time ago that I can beat him. Even with all the improvement he has, I had mine too. I think it’s gonna be a great battle, to go out there and see who made the most of his time.”

After receiving his black belt in early 2021, Marinho burst onto the scene with a double-gold performance at the 2021 IBJJF no-gi Worlds. That success proved to be a double-edged sword, though, as it brought with it a new host of opportunities, responsibilities, and obligations.

According to Marinho, he has had to adjust to those new demands that come outside of the training room:

“I won the Worlds. And when you win something big like that, a lot of opportunities start coming for you, outside of jiu-jitsu… Before you just have time for the mat, and now you have to do seminars, you need to do more things, stuff, sell DVDs. All these things that you need to do take your time away from the mats, you know. And that’s something that I kind of felt that this year I paid the price a little. So many things going on outside of the mats.”

How to watch: WNO: Pedro Marinho vs. Giancarlo Bodoni takes place on Friday, November 11 and will air live on FloGrappling (subscription required).