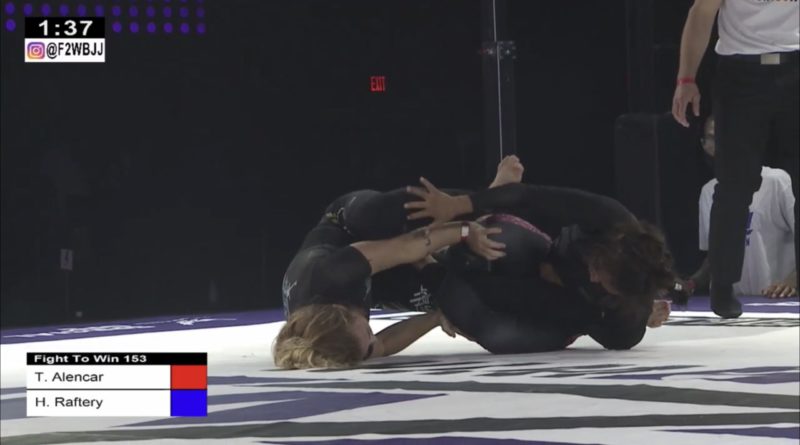 Fight 2 Win 153 last night, Sep 25th, featured many black belt matches. One of those in particular was what I imagine promoter Seth Daniels looks for when putting on shows. This was the match between Talita Alencar and Heather Raftery.  Alencar is a multiple time IBJJF world champion out of Alliance Academy with Rubens Charles. Raftery has won several IBJJF open tournaments and is a black belt under Andre Galvao and also a world champion in the equestrian sport of Cutting.

Alencar pulled guard right from the start and worked from a De La Riva guard. Raftery quickly grabbed a body lock and looked to take the back. Raftery tried to get a better position to the back by inverting but ended up on bottom. Then, Alencar tried to pass but was stifled by Raftery’s lockdown guard.

Alencar applied pressure from top and eventually cleared the lockdown and passed to mount. Raftery turned away giving up her back but quickly spun out and to Alencars full guard.

Alencar worked two on one wrist control and hunted for submissions. Raftery took advantage of an open guard and sat back for a leg lock. She came up short and both women got to their feet but with Alencar in a single leg. Alencar landed a beautiful takedown. She tried to pass but was unable. They worked their way to the edge of the mat and had to be reset.

Alencar was on her back against a standing Raftery. She inverted and then both were fully engaged in leg entanglements and inversions. Raftery looked to have a leg lock opportunity but when Alencar escaped, she kicked Alencar away and got back to her feet.

Both women were getting rough by clubbing each other in a wrestling exchange. Alencar threw what looked to be her mouthpiece to her cornermen and carried on.

Raftery pulled guard and attempted a triangle but Alencar escaped and both attacked the legs. They tried to find submissions in the fading moments of the match. Alencar locked in a toe hold but Raftery spun with it and escaped as the clock ran out.

The judges scored in favor of Alencar. We can only hope to see these two on the mats again soon.