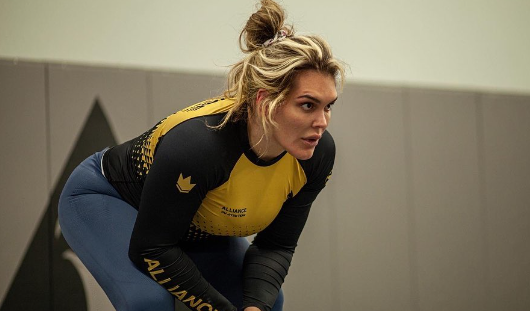 For 11 years Gabi Garcia has largely owned the women’s 60+ kg. division at the ADCC World Championships. This weekend, she’ll look to capture her staggering fifth ADCC gold medal, a feat that would only further entrench her as the greatest female ADCC competitor of all time.

Below we discuss the favorite, contenders, and dark horse of the women’s 60+ kg. division at the 2022 ADCC World Championships. But first, a look at the division as a whole.

Perhaps the most accomplished female black belt of her generation, Garcia has used her massive physicality for over a decade to consistently win at the highest level, including, year and year, the ADCC World Championships.

Lately, though, Garcia has shown signs that her run at the top could be ending. After winning gold in 2019, Garcia picked up wins over potential ADCC opponents Kendall Reusing and Elisabeth Clay (in a somewhat controversial decision), but lost four of her five matches in 2021. None of those losses came against any of her fellow ADCC competitors.

Garcia is the most experienced grappler in the division by a significant margin. She is also the bracket’s largest and strongest grappler. While those advantages still exist, Garcia’s gold medal is far from guaranteed.

Several women have the ability to topple Garcia. First among them is Grappling Insider’s 2021 no-gi grappler of the year, Atos representative Rafaela Guedes. A tenacious and physical grappler, Guedes holds wins over fellow 60+ kg. competitors Kendall Reusing and Elisabeth Clay — victories that propelled her to a Who’s Number One title belt and a no-gi world championship. Importantly, Guedes has never before faced Garcia in competition.

Kendall Reusing might be the best takedown artist in the division, instantly making her a contender to see the podium. And despite her 2020 submission loss to Garcia, the Gracie Barra black belt has continued to show improvement in recent years, showing off a varied submission game to complement her top-tier wrestling.

Finally, Ares BJJ representative Elisabeth Clay will look to live up to the expectations she was given when she won the 2017 ADCC West Coast Trials as a 16-year old. In what will finally be Clay’s much anticipated ADCC debut, look for her to attack her trademark leg locks early and often.

Rookie black belt Amy Campo certainly has the skills to upset some more established competitors this weekend. The Zenith BJJ athlete impressed at the West Coast Trials where she used precise guard passing and a dynamic submission attack to finish three of her four opponents on her way to the gold medal.

The one opponent that Campo couldn’t finish? Fellow ADCC competitors Elisabeth Clay, who she bested by a score of 13-0.

Campo appears to have an incredibly bright future ahead, but she could firmly establish herself as an elite competitor with one or two big wins this weekend.

Ben Coate has 859 posts and counting. See all posts by Ben Coate