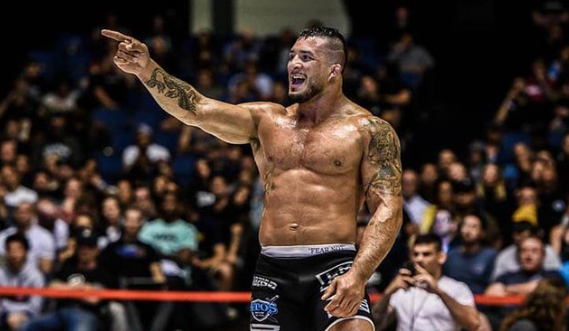 The 2022 ADCC World Championships take place on September 17-18, live from Las Vegas, NV. Ahead of the big tournament, Grappling Insider will be previewing each division. Read a preview of the 66 kg. division here, and the 77 kg. division here.

More than any other division at the 2022 ADCC World Championships, 88 kg. represents a clash between veterans of grappling and the new generation.

Below are the favorites, contenders, and dark horses of the 88 kg. division at the 2022 ADCC World Championships. But first, let’s look at the full competitor list:

Marcelo Garcia black belt Matheus Diniz will look to build on a dominant 2019 gold medal run that saw him defeat Craig Jones in the final. Importantly, Diniz also bested returning 88 kg. competitors Pedro Marinho and Josh Hinger on his way to the final.

Diniz will once again need to lean on his top-tier wrestling, as the 88 kg. is loaded with talented takedown artists.

One of those top wrestlers is Lucas “Hulk” Barbosa. A bronze medalist in the 99 kg. division at the 2019 ADCC World Championships, Barbosa’s wrestling, guard passing, and top pins make his game perfectly suited to the ADCC rule set. That, coupled with the added conditioning and physicality he has certainly gained from recent MMA training, make him one of the favorites this weekend.

Mason Fowler has only improved since his loss to Craig Jones in the quarterfinals of the 2019 ADCC World Championships. Through extensive competition under the EBI rule set, he developed one of the world’s best back control and finishing games to complement his natural athleticism. Fowler is skilled in every area and has shown to be an expert strategist under the guidance of his coach Caio Terra.

For Tye Ruotolo, the question seems to be not “if” but “when” he will win an ADCC title. And after finishing fourth at the 2019 ADCC World Championships, the 19-year old Andre Galvao black belt seems poised to take home gold. More than just a fan-favorite, Ruotolo’s relentless, non-stop style has earned him notable wins over Mica Galvao, Dante Leon, and Garry Tonon.

Giancarlo Bodoni is a perfect representation of New Wave Jiu-Jitsu; he is a patient, methodical technician that can attack the upper and lower body equally well. He used that skill set to win the East Coast Trials, defeating 99 kg. competitor Elder Cruz in the final. Bodoni has since picked up a win over fellow 88 kg. athlete Jay Rodriguez.

Rounding out the field of contenders to watch is no-gi world champion and Who’s Number One light heavyweight champion Pedro Marinho. With his explosive takedowns and ultra-dangerous guillotine, he is a handful for any grappler in the division.

A pair of B-Team representatives, Izaak Michell and Jay Rodriguez, could turn heads this weekend with upset performances. Both men are relative newcomers to the elite competition scene, but have shown to be world class in dominant runs through their respective Trials events.

Training out of the same gym, it’s no surprise that both Michell and Rodriguez are excellent wrestlers and back-takers — primary skill sets needed to compete at ADCC.

Finally, keep an eye on European Trials winner Eoghan O’Flanagan. He punched his ticket to the World Championships on the strength of five consecutive heel hook victories at Trials, and in May, O’Flanagan showed he was more than just a leg locker with a triangle win over ADCC veteran Jon Blank. Simply put, O’Flanagan has the submission finishing abilities to make waves.

Ben Coate has 855 posts and counting. See all posts by Ben Coate