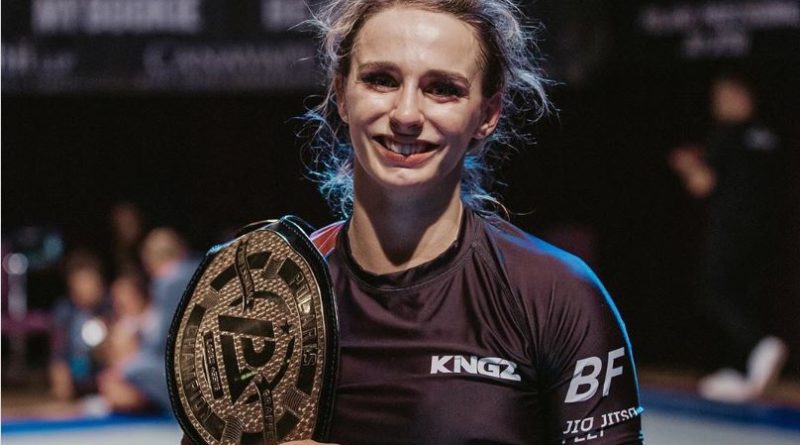 And STILL…. Ffion Davies wins a decision in a -55KG championship bout. Hope everyone enjoyed the event. Thank you for the support!!! #polaris11

Ffion Davies cleared her only significant loss off her record tonight, using top pressure and guard passing to defeat Talita Alancar at Polaris 11.

The match unfolded much the same way as their first fight at EBI 11. Alancar surrendered the top position for guard playing, which seemed to play into Ffion’s strengths as she relentlessly used standing and stacking guard passes to achieve superior positions.

The match got extremely kinetic at times. The two flyweights drove each other off the mats close to a dozen times, causing chaos as they collided with refs, camera men, and the two continued to grapple even on hardwood.

Alancar aggressively tried to establish neck control, so much so that the referee warned her that she was essentially slapping her opponent.

Ultimately, Ffion Davies was able to cruise to a decision, largely off her positional dominance. She briefly threatened a number of submissions such as rear naked chokes, head and arm chokes, and even a late heel hook.

Talita was no slouch though. She has her own moments where she was able to attempt some leg attacks, including a legitimate kneebar attempt late in the match.

Fffion Davies retains her title, and called for a fight at a new weight class. She was clearly the bigger, stronger fighter of the night. A jump to bantamweight seems to be a better fit for her.