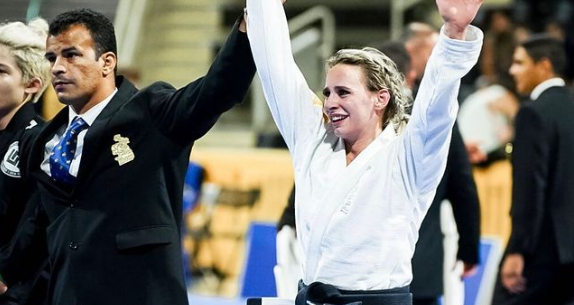 Welsh grappler Ffion Davies has made it to the Brazilian Jiu Jitsu black belt World Championship finals, being the first British/Welsh grappler to ever do so.

If you take a look at the previous winners of the black belt divisions at the World Championships, there is one common occurrence – the Brazilian flag. The majority of world champion winners have been Brazilian, which comes as no surprise as that is obviously where the sport originated, so to have a British grappler waving the flag in the finals is a huge achievement for UK BJJ. In addition, to have a woman become the first person to achieve this milestone is an incredible feat for both UK BJJ and womens UK BJJ.

Davies won both the 2018 and 2021 No-Gi black belt world championships, and has consistently proven to be one of the best BJJ competitors out there. After her 2018 No-Gi Worlds win, Davies became the first black belt from the UK to ever win that tournament.

Breaking records one at a time, will the mundials be the next record broken by the Welsh champion? The black belt under Darragh O Conaill will be fighting Janaina Lebre in the lightweight final.

Best of luck Ffion, us fellow Brits are rooting for you!