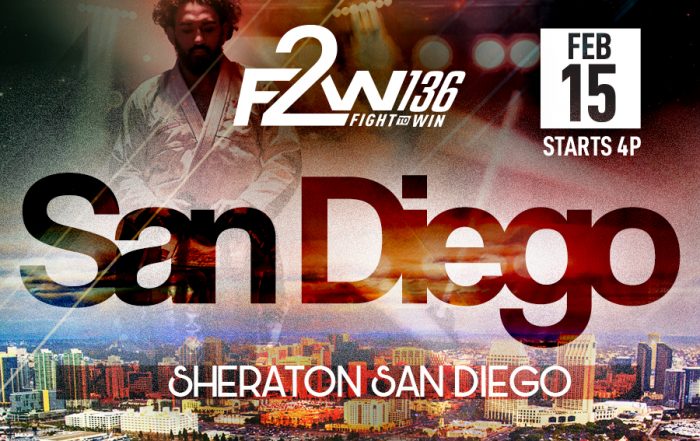 Fight 2 Win 136 has now left Los Angeles, California after putting on yet another in a long line of fantastic events. This event saw the first appearance of Kaynan Duarte since the news broke of his failure of a post-fight drug test. In the main event of Fight 2 Win 136, Duarte took on Vinicius “Trator” Ferreira, the ADCC 2019 silver medalist and most recent IBJJF No Gi World Champion.

The match started relatively slow with both fighters seemingly respecting the other’s standing grappling game. They battled patiently in the clinch for about a minute and a half until Duarte surprisingly decided to sit to guard. This was only for a moment as Ferreira was a little hesitant to engage with the ADCC Champion on his terms and in his guard, so Duarte decided to stand up. He raised the tempo this time by pulling Butterfly guard the moment the pair clinched up and immediately working to sweep Ferreira to the right side. Ferreira used the elevation to stand back to his feet and disengage again, Duarte wasting no time in standing back up this time.

They both clinch up and Duarte again tries to pull Butterfly guard and sweep but Ferreira stands to prevent it again, this time grabbing one of the feet and looking for an Estima lock briefly. He gives it up quickly and looks to pass but Duarte frames and stands back to his feet again. Duarte is only inches away from landing a slick Footsweep and Ferreira nearly falls off the stage as he stumbles backwards to recover. The referee intervenes to protect Ferreira and reset the pair in the center with Duarte quickly sitting to guard again.

It seems like Ferreira is aware that the match is nearly halfway as he starts to work his passing game a lot quicker now, forcing Duarte into Z-Guard and trying to use a Leg-Weave to pass. Duarte manages to kick off Ferreira’s chest to create distance and use the space to stand back up. They clinch up and Duarte pulls Butterfly guard once more, this time settling into Z-Guard himself and attempting to invert. Ferreira steps back to avoid the invert and both men again return to standing. Duarte has a little more urgency this time as he’s faking shots and and attempting a snapdown, he’s pushing the pace a little more as the match reaches the six-minute mark.

Duarte uses a feinted shot to pull Butterfly guard again but he still can’t get the sweep to work and as Ferreira stands again, so does he. Duarte can’t seem to get the fight to the ground in the position he wants, so again he sits to guard and invites Ferreira to try and pass. As Duarte goes into Z-guard again, he inverts a lot quicker this time and catches Ferreira’s foot to off-balance him but he recovers to stand up along with Duarte again. The last minute sees both men pushing the pace a lot more and attempting Footsweeps and Armdrags from the clinch. Duarte nearly gets in on a Single-leg but is shut down quickly, then Ferreira sits to guard, inverts and frantically tries to isolate a leg all in the last ten seconds of the match.

With the majority of the match being evenly contested on the feet and Duarte being the one who was more aggressive with his sweep attempts on the ground, he wins the Judge’s decision.