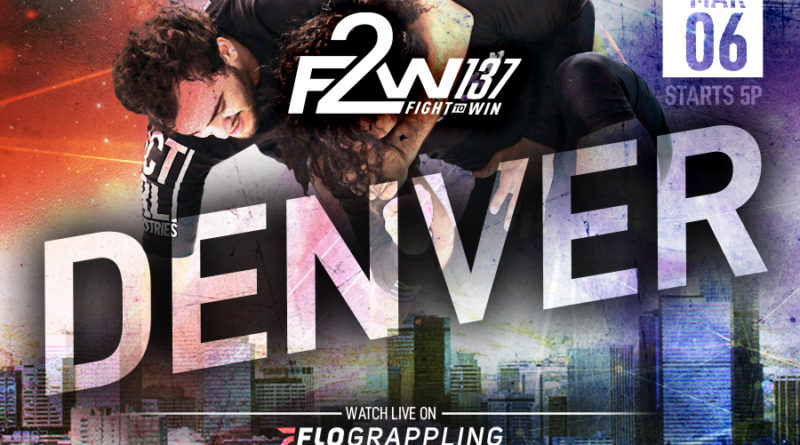 Fight 2 Win 137 makes it’s way to Denver, Colorado on March 6th and brings with it a textbook lengthy event featuring elite grapplers on the main card and up-and-coming local talent throughout the prelims. The main event was announced recently as a meeting between two of the sport’s best current competitors on the heavier end of the scale, Roberto Jimenez and Lucas “Hulk” Barbosa. This comes after an great equally great matchup for the Welterweight title, Marcio Andre v Michael Liera Jr, and another 8 fights between fantastic black belt competitors.

Roberto Jimenez is a fantastic newcomer to the highest levels of BJJ. Despite being incredibly young, Jimenez is no stranger to the big stage as he won the IBJJF World Championships as a Juvenile, Purple belt and Brown belt as he grew up. He quickly proved himself capable of keeping up with the athletes who’ve been at this level for years though as he beat Keenan Cornelius at Flograppling’s Who’s #1? event this year. Just recently, he was also able to defeat Dan Martinez at the ill-fated Substars event. He’s a great talent and he’s capable of hanging with the best already, as the years go on he’ll no doubt prove himself one of the best around

Lucas “Hulk” Barbosa is a completely different animal though, not only is he is in the upper echelons of grappling’s elite but he’s an absolutely freakish athletic specimen. Hulk by name, Hulk by nature. His most recent appearance was making it all the way to the final of Kasai Pro 7 and eventually falling short to Roberto “Cyborg” Abreu, one of the greatest grapplers of all time. With that in mind, expect Hulk to show Jimenez that no matter how good you are, everyone loses once in a while.

Marcio Andre is a multiple time IBJJF European Champion and has won the IBJJF World Championships at every colored belt. He’s best known for his versatile Open Guard, one that gave Johnatha Alves huge trouble at The Artista Invitational 2 most recently. This came shortly after Andre’s last appearance at Fight 2 Win where he thoroughly dominated former UFC and WEC World Champion, Benson Henderson. That match took his Fight 2 Win record to 3-1 and with Michael Liera Jr’s Fight 2 Win record being a stunning 5-0 with 3 finishes, he gets the edge there.

The pair have met twice before and have split those matches one apiece, both fights being decided on points. Michael Liera Jr has an equally dangerous Guard game and has worked his De La Riva magic to perfection on several occasions. Given that they both have pretty similar competitive records, this match will be incredibly close. However, it’s worth knowing that Liera Jr is incredibly hard to submit, having only tapped 3 times in over 100 matches and has a reasonably high submission rate at 47%. Andre however has been submitted in just over a third of his losses and has a significantly lower chance of getting the tap, doing so in only 20% of his wins. With that in mind, Liera Jr is far more likely to win via submission here but should the match go the distance, this really is anyone’s to take.

For tickets to the live event in Denver, Colorado on March 6th, click here.