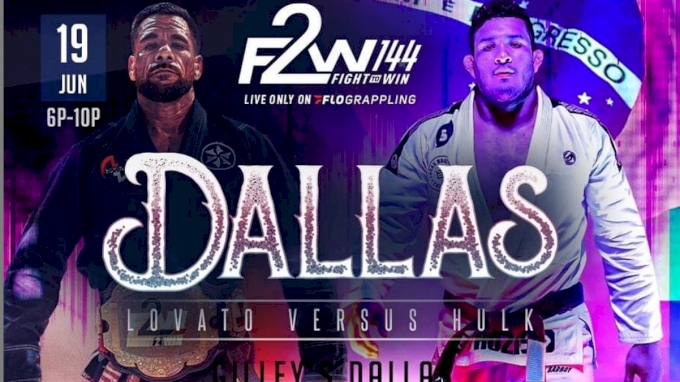 Fight 2 Win 144 gave us everything we hoped for when the promotion announced the star-studded lineup for the event, and once again a trip to Dallas, Texas results in a spectacular night of elite submission grappling. The top three fights on the card all featured mainstays in the top tier of submission grappling including one women’s match and two title fights just to ensure that there was truly something for everyone.

The first of these matches was a close contest between Jonnatas Gracie and Edwin Najmi. Sticking true to his reputation for flying submissions, it didn’t take long before Najmi locked up a tight Flying Triangle Choke that forced Gracie to escape, only to immediately start working to pass his guard. Najmi then managed to return to a standing position briefly before the fighters re-engaged on the ground, this time with Gracie on his back instead. Najmi started taking his turn to work his passing game, even briefly attempting a D’arce Choke but it wasn’t long before Gracie reversed the position and the two grapplers both fought for Toeholds. Gracie managed to sink in a Straight Ankle Lock in the final minute but there wasn’t enough time remaining for him to secure the finish, although it did seem to tip the balance and earn him the Split Decision victory.

The Co-Main event saw another close contest between Nathalie Ribeiro and Talita Alencar for the F2W Bantamweight No Gi Women’s Championship. Ribeiro immediately started out as the aggressor, working for leg entanglements straight away and forcing Alencar to disengage and reset in Ribeiro’s guard. Alencar started to up the ante with a Toehold attempt and a Cartwheel Pass, although neither came to fruition and the pass attempt landed her in a tight Armbar instead. Alencar managed to free her elbow to escape before making another short-lived attempt at a Toehold and forcing a scramble as a result. After both women engaged in a leglock battle, Alencar managed to gain the upper hand and quickly took Ribeiro’s back to lock up a tight body triangle. Ribeiro managed to escape slowly, even preventing Alencar from transitioning to an Armbar just as the time ran out. Ribeiro was awarded the Split Decision in a match that really could have gone either way.

The final match of the night was much quicker than the ones before it as the recently retired Bellator Middleweight World Champion Rafael Lovato Jr took on Lucas “Hulk” Barbosa. Lovato Jr pulled guard early on but Barbosa managed to pass to Half Guard pretty much straight away. From here, Barbosa worked slowly to side control and pinned the MMA fighter in a strong position. As Lovato Jr attempted to escape, Barbosa made a lightning-quick transition to an Armbar and secured the tap almost immediately.

The full event was streamed live on Flograppling and to watch the replay, click here.