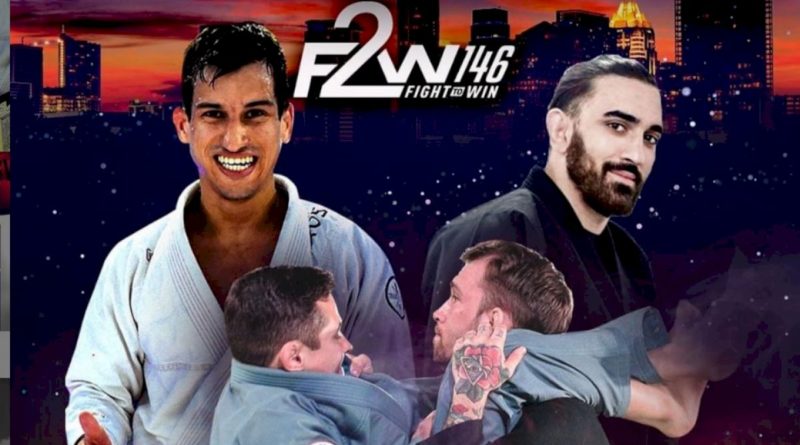 Fight 2 Win is back with their 146th event live from Austin, TX. This time they’ll be out of Dallas for the first time since F2W 138. Austin, TX can expect a bang from this event, as it features some of the most explosive math ups we’ve ever seen. We will preview Fight 2 Win 146, the best match ups, underdogs and fights to look out for.

The main event of the night is Edwin Najmi vs Osvaldo “Queixinho” Moizinho. That alone should tell you that this fight is going to be fireworks! Najmi has been featured in our previews before, but to quickly summarize, he is a sniper-like BJJ player. He lures you into taking a shot or allowing him double collar grips, and makes you pay for it.

Look out for his flying triangle from double collar when standing . He’s caught some amazing athletes with this, including Nicholas Meregali. From defending the single leg, he’ll throw in D’arces from everywhere. So, if you think your opportunity is in playing top, he’ll also throw triangles from off-balances and sweep recoveries, especially from spider guard.

Quiexinho is a gamer as well, and one the most active competitors on the F2W circuit. He’s coming off a loss in No Gi against Garry Tonon, but he is much more dangerous in th Gi. This guy will throw in flying omoplatas from standing, as we saw on F2W 140 against AJ Agazam, and has a very agressive open guard/DLR game from bottom.

The second featured bout of the night is the return of Caio Terra against Gabe Tuttle, from 10th Planet. It will be a pretty high jump in competition for Gabriel, who will have his plate full against 10-time No Gi world champion Terra. We’ll have to wait and see what type of gameplan he implements to try and beat the legend. From the matches I could gather, Gabe plays a guard-oriented game focused on getting inside position and attacking heel-hooks or the back when the opponent turns to defend them.

Caio is as dangerous player. He is both crafty and precise, and a handful to anyone who fights him. Caio is a guard puller himself, so it’ll be interesting to see if he accepts the pull from Tuttle or goes for the double pull instead. Playing the inside position game against Caio is a challenge in on itself, as his trademark footlock is setup from there. Expect a very dynamic game from Caio pushing the action. We’ll see what Fight 2 Win 146 brings for these two athletes!

Everyone who’s been following some of the breakdowns in this site knows that John Combs and Andrew Wiltse are a recipe for instant fireworks. Combs is a savage of a human being. He consistently pushed the action attacking single legs, snap downs and guillotines. He plays both top and bottom, but will definitely scrap on the feet. Wiltse needs to tuck his neck for this one, as once Combs snatches a guillotine, its hard to pull out.

Andrew Wiltse is just like Combs in that he like pushing the pace in his matches. He’ll exchange on the feet or pull guard indifferently, which makes him a challenge to prepare for. His last match was a back and forth war with Isaiah Wright, which he won via RNC. He uses a lot of side to side movement to create opportunities to pass or attack the back, so Combs is for sure thinking of staying on top if possible. Look out for this one!

You can check out the full Fight 2 Win 146 card below! You can also enter this link if you want tickets of information about the event.