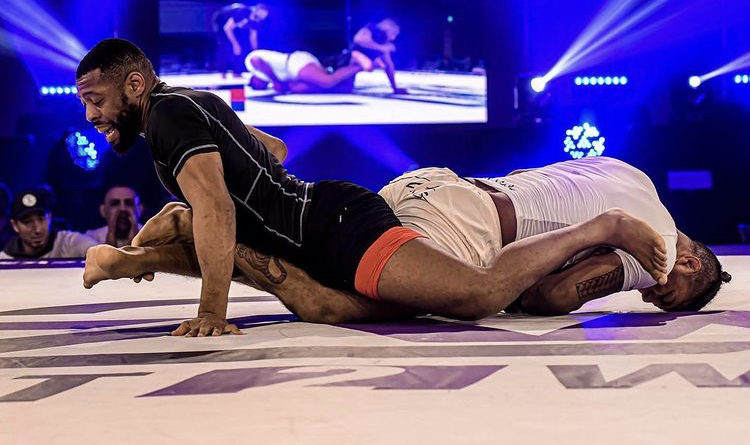 On Saturday, March 20, Fight to Win returned to action with a card headlined by one of the sport’s most talented big men, Victor Hugo. Lower on the card, Pedro Marinho made his black belt debut, and multiple-time world champion Osvaldo “Queixinho” Moizinho clashed with Gabriel Sousa.

In the main event, IBJJF no-gi world champion Tim Spriggs gave up a plenty of weight against the much-larger Hugo, but put up a spirited fight nonetheless. Early in the match, Spriggs seemed ready to attack Hugo’s legs, but it was Hugo that would ultimately win by heel hook. Playing the majority of the match from a seated open guard, Hugo eventually found himself able to invert and tie up Spriggs’ legs and finished the heel hook from the belly-down position.

Check out the full event results below.

In the evening’s co-main event, Gabriel Sousa once again stated his case for a title shot with an impressive and high-paced match against the ultra-experienced Queixinho. Originally slated to face champion Kennedy Maciel, Sousa used slams early in the match and an aggressive guard game to secure a decision win.

Elsewhere, Thiago Macedo edged Cole Franson in an incredibly competitive match that saw both men close on submissions. And rounding out the night’s top-four black belt matches, Jake Watson spoiled the black belt debut of Pedro Marinho. Watson’s aggressive entries to the legs and effective work from the 50/50 position earned him the decision against the highly-touted Marinho, who will no-doubt make noise in the black belt division as he competes more often.