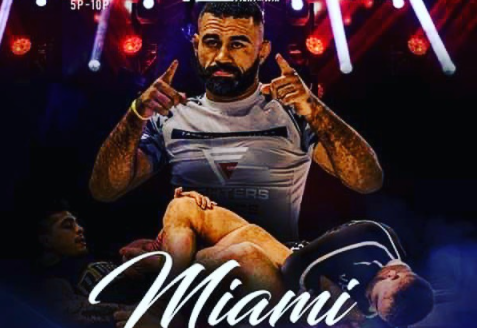 One of the year’s most intriguing match-ups is set to go down this Saturday at Fight to Win 171. In the main event, grappling phenom William Tackett will take on seasoned veteran Vagner Rocha in a no-gi submission-only match. The card also features a pair of title matches, as well as Danaher Death Squad representative Oliver Taza.

View the full card line-up, betting odds, and start times below, via Fight to Win’s Instagram.

The main event between Tackett and Rocha is a pick-em, and for good reason. It’s an excellent match-up. Still just 19 years old and just a month into his life as a black belt, William Tackett is one of the sport’s top competitors. His dangerous guard and leg locks should make for an interesting style clash with Vagner Rocha, who is has built a reputation as being one of jiu-jitsu’s most fearless competitors. Although Rocha will occasionally choose to attack from his back, he generally does his best work from the top position where he will relentlessly work to pass and, eventually, take the back.

Both Tackett and Rocha are coming off losses, albeit against two of the best. Tackett dropped a decision to Victor Hugo at Third Coast Grappling 6, and Rocha was submitted by Gordon Ryan at Who’s Number One. Prior to that, Rocha had gone on an unbeaten streak that included wins over ADCC champion Yuri Simoes, Jon Blank, and Ronaldo Junior. For his part, Tackett has recent notable wins over Manuel Ribamar, John Combs, and Tex Johnson.

Look for Tackett to attack from his back in this match, with Rocha attempting to stifle Tackett’s attempts to create leg entanglements. While that seems like a likely scenario, the pair might also choose to wrestle a bit on the feet, something Rocha will happily to do as a way to impose his will on the younger Tackett.

How to watch: Fight to Win 171 takes place on Saturday, April 24 and airs live and exclusively on FloGrappling.