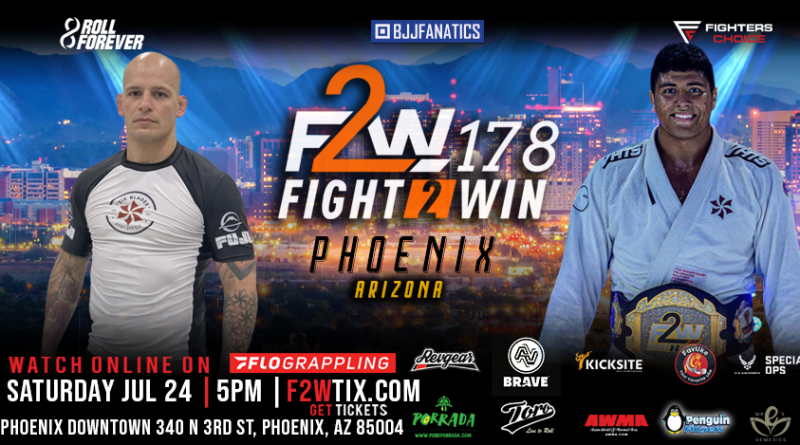 On Saturday, July 24, Fight To Win 178 will go down live from Phoenix, AZ. In the main event, jiu-jitsu legend Xande Ribeiro will compete for the first time this year as he takes on Fellipe Trovo. Also in action is elite heavyweight competitor Victor Hugo, as well as four-time IBJJF no-gi world champion Osvaldo “Queixinho” Moizinho. View the full card line-up and betting odds below.

One of the most respected and accomplished jiu-jitsu competitors ever, Xande Ribeiro is a nine-time IBJJF world champion across gi and no-gi competition, a two-time ADCC champion, and has been competing as a black belt for two decades. He last competed in 2020, going to a draw with top middleweight competitor Vagner Rocha. Prior to that, he submitted Gabriel Almeida at Fight To Win 145.

Ribeiro will be facing Fellipe Trovo, an accomplished black belt competitor in his own right. Trovo is coming off a gold medal performance at the no-gi American Nationals.

Lower on the card, Osvaldo “Queixinho” looks to bounce back from a close decision loss to Gabriel Sousa at Fight To Win 167; he’ll be taking on 2021 American Nationals champion Pedro Dias. Also, Victor Hugo — a black belt under Ribeiro and one of the most exciting super heavyweight grapplers in jiu-jitsu — finds himself as a heavy favorite against 2020 Pans champion Guilherme Augusto.

How to watch: Fight To Win 178 takes place on Saturday, July 24, and will air live on FloGrappling (subscription required).