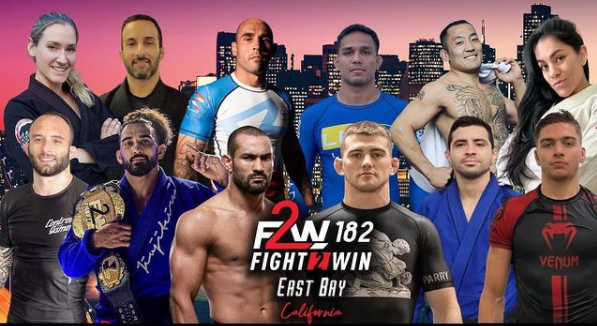 View the full Fight To Win 182 line-up, start times, and betting odds below.

The main event should be entertaining and competitive, as both Dante Leon and Davi Ramos are explosive athletes that have found plenty of success at the highest levels of jiu-jitsu. Although Ramos has been competing less frequently over the past few years as he focused more of his efforts on his UFC career, he is nonetheless an incredibly dangerous opponent, and Leon would be foolish to take him lightly. That said, Leon is favored for a reason: he has been the more active and successful jiu-jitsu competitor lately, and his world class guillotine and back-taking abilities can change the match in an instant.

Also in action is Unity Jiu-Jitsu’s Edwin Najmi, widely considered one of the most exciting grapplers in the sport, thanks to his high-flying submission attacks. He’ll be taking on Checkmat’s Jackson Nagai, a guard passing specialist that earned silver at the 2020 IBJJF Pans.

Another exciting match features veteran competitors Samir Chantre and Gianni Grippo. Grippo has looked phenomenal in no-gi competition this year, and is coming off an impressive run through the Emerald City Invitation, which included a win over ADCC silver medalist Kennedy Maciel. Chantre is accomplished in his own right; he is a three-time IBJJF no-gi world champion and is coming off a win over Orlando Castillo at Fight To Win 176.

How to watch: Fight To Win 182 takes place on Saturday, August 28, and will air live on FloGrappling (subscription required).