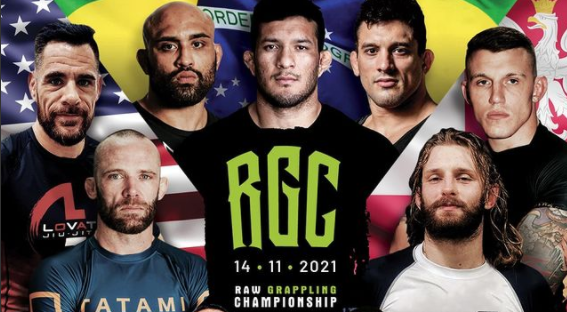 On Sunday, November 14, a new promotion will enter the competitive grappling space, as Raw Grappling Championship will hold its first event live from London. The card features a number of intriguing superfights with high-level competitors, as well as an eight-man submission-only grand prix that seems likely to produce excellent matches.

Below is the current grand prix line-up, which will be contested under 12-minute, submission-only matches.

On one side of the bracket, Atos representative Josh Hinger might be the favorite to make it to the finals. An ADCC bronze medalist and multiple-time no-gi world champion, Hinger is a guillotine and front headlock specialist with plenty of experience in submission-only matches. Hinger will have a stiff test in his first match against the ultra-aggressive Bradley Hill.

On the other side of the bracket, two-time ADCC champion Yuri Simoes is the most accomplished competitor in the field. And with a pair of recent submission-only wins over elite competitors Devhonte Johnson and Fellipe Andrew, Simoes will look to keep momentum going here. He’ll square off with dangerous leg locker Jed Hue in the first round.

Former Bellator MMA middleweight champion and IBJJF gi and no-gi world champion Rafael Lovato Jr. will take on ADCC veteran and one of Europe’s most prolific competitors in Adam Wardzinski. The match should be an interesting clash of styles, as Lovato’s methodical pressure passing will go head to head against Wardzinski’s notoriously dangerous butterfly guard.

How to watch: Raw Grappling 1 will take place on Sunday, November 14 and will air live on FloGrappling (subscription required).