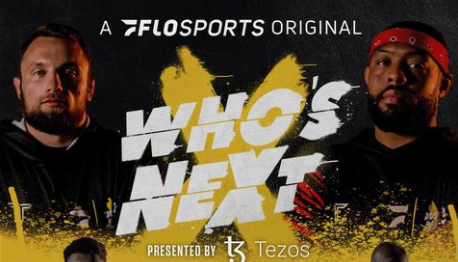 FloGrappling is stepping into the world of reality television. Next month will mark the debut of “Who’s Next: Submission Fighter Challenge,” a competition reality show in the mold of the UFC’s “The Ultimate Fighter.” The show is the first reality programming produced by FloSports, according to a press release from the company.

Who’s Next will feature 16 up-and-coming submission grapplers from around the world competing against each other in no time limit, submission-only matches for a cash prize and a three-match contract with Who’s Number One (WNO). These are true no time limit matches, with one match lasting three hours.

Who’s Next will air throughout May and June. The show’s two finalists will then square off live at a WNO event in July.

More than just competition, Who’s Next will also showcase the athletes’ personalities, backstories, and, of course, pranks.

Filmed in Austin, TX, in November 2021, ADCC silver medalist Craig Jones will serve as a team coach opposite current WNO heavyweight champion Tim Spriggs. Jones and Spriggs have engaged in a public back-and-forth over the past few months; their rivalry seems tailor-made for television.

Watch the trailer for Who’s Next below.

How to watch: Who’s Next: Submission Fighter Challenge will air beginning in May on FloGrappling and will be free to watch — no subscription required.