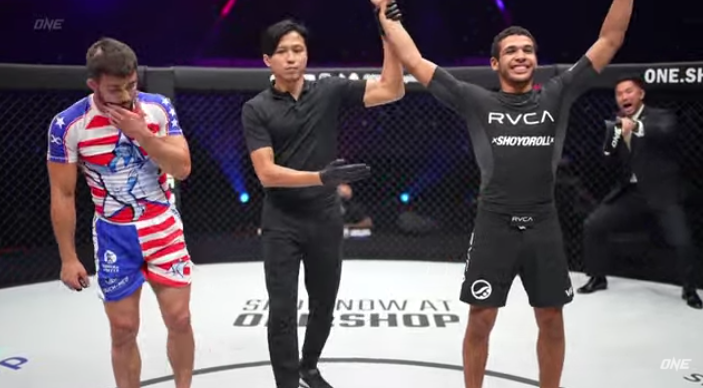 Tye Ruotolo couldn’t have asked for a better ONE Championship debut. On Friday at ONE 157, Ruotolo made quick work of ADCC silver medalist and former ONE Championship MMA title challenger Garry Tonon, submitting him with his trademark d’arce choke in under two minutes.

Watch Tye Ruotolo vs. Garry Tonon from ONE 157 below.

After a bit of feeling out on the feet, Ruotolo tossed Tonon to the mat, where Tonon accepted to work from open guard. In a matter of seconds, though, Ruotolo was able to secure a deep grip on the d’arce choke and the tap moments later.

Still just 19-years old, Ruotolo just furthered his case for being one of the top pound-for-pound grapplers in the world alongside his twin brother Kade, who also competed and won in his ONE Championship submission grappling debut. Ruotolo was an IBJJF brown belt world champion, and is the current Who’s Number One welterweight and middleweight champion.

“I’ll be honest, when I first took the match, I thought it was gonna take me about six or seven minutes to get the sub. Through fight week I was sizing up Garry and I thought, I realized, it was gonna come a bit quicker,” said Ruotolo in his post-match interview.

Also, Kade Ruotolo, in the cage fresh off his win over Shinya Aoki just minutes prior, asked for a match with Tonon after Tonon had apparently made some disparaging comment toward Kade.

This was Tonon’s first submission grappling match since 2020. The John Danaher student has spent the past few years focusing on his still very promising MMA career.