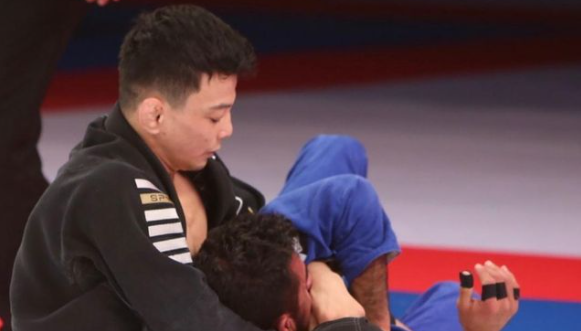 On April 7, the Abu Dhabi World Masters took place, and veteran black belt competitor Paulo Miyao was able to walk away with gold. Miyao dispatched Arielson Jacome by points in the first round before facing American Javier Gomez in the finals.

Miyao displayed his underrated guard passing game before eventually finishing the match with his bread and butter: an attack from the back. Check out the full match below.

After using an inversion to sweep, we see Miyao score a clean guard break. Gomez is able to return to guard, but Miyao again cuts through the guard, this time to the back. From the back position, few in the world are better than Miyao, as he traps one of Gomez’s arms and sinks in a classic collar choke.

Paulo Miyao and his twin brother Joao are two of the best competitors of their generation. As a part of the then-new wave of jiu-jitsu players specializing in the berimbolo, even winning an IBJJF brown belt absolute world championship as a featherweight. As a black belt, he is a multiple-time Pans and world champion, and has been one of the sport’s most active competitors for nearly ten years. Miyao is also a two-time ADCC bronze medalist, with wins over top competitors like Tye Ruotolo, Nicky Ryan, and Geo Martinez.