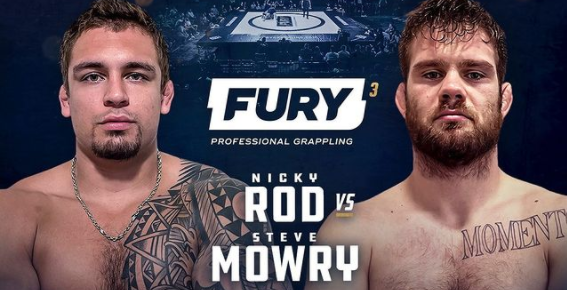 Mowry sports a perfect 10-0 professional MMA record that includes seven first-round finishes. Six of his wins overall have come by way of submission. He is currently the no. 6-ranked heavyweight in Bellator, and with his recent first-round submission win over veteran Rakim Cleveland, is likely just one or two victories away from a shot at the Bellator title.

In November, Mowry was awarded his BJJ black belt by Gilbert Burns.

A former member of the Danaher Death Squad and current member of The B-Team, Rodriguez has competed in just three matches this year. In March, Rodriguez impressed with a dominant performance over Yuri Simoes at Who’s Number One. In June, Rodriguez returned to action at the Third Coast Grappling absolute grand prix, defeating Pedro Marinho before losing a decision to Victor Hugo.

As the professional grappler, Rodriguez will be a favorite over Mowry. However, at 6’8″ and a Gilbert Burns black belt, Mowry could pose some problems for Rodriguez. And with Mowry’s background in MMA, he’s likely to have strong takedown defense, perhaps negating Rodriguez’s best weapons.

How to watch: Fury Grappling 3 takes place on Thursday, December 30 and will air live on UFC Fightpass (subscription required).