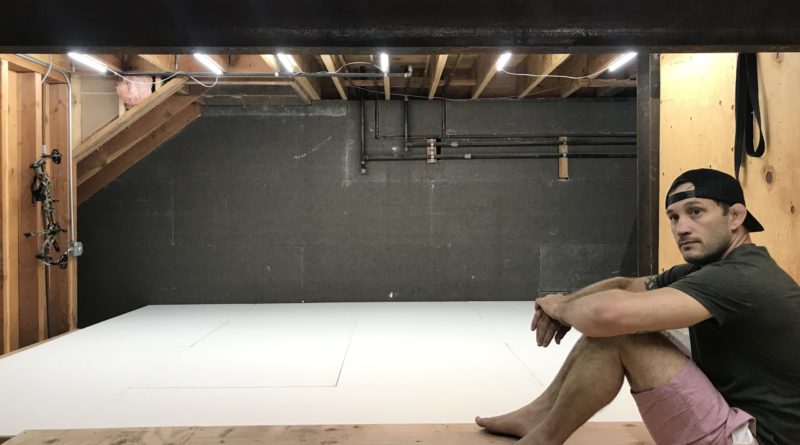 The first set of mats I bought were cheap puzzle mats that were made for weight-lifting. I set them up in a spare room in my apartment outside of Tulsa. If I didn’t duct tape them together they’d come apart the second I touched them. I had been training martial arts for only six months, but felt it drawing me toward something.

I talked my high school friend into training with me. Jared is a graphic designer who had never grappled. Every Sunday, I drilled moves with him that I learned in class and even “invented” a wrist lock that I thought was revolutionary.

‘‘How good at fighting can I get?’’ I wondered.

I worked at a hospital in I.T. and was terrible. Fixing electronics wasn’t really my strong suit, but I was good at picking up broken printers or computers and taking them to co-workers who knew what to do. My distraction with fighting didn’t help. Often, I showed up dressed in business casual and a black eye. Like it was Halloween, and I was a character from Fight Club.

Eventually, I saw the need for an MMA gym in Tulsa, so I talked Jared into starting one with me. We found a cheap warehouse in an industrial zone off Highway 51 and signed a lease. When I opened the overhead door of our new gym, sunlight flooded the empty space and nearly blinded us. I squinted at Jared: “We need some mats.”

A high school wrestling coach loaned us a couple of maroon mats that took six guys and two trucks to move. I loved cleaning them every night after practice. For some reason, this was a sort-of meditation for me. I had a system and didn’t like anyone else taking part in it.

Throughout the week the mats separated, leaving a gap. But I had just the answer. Jared pressed down on one end of the tape, while I pulled the roll along the seam. It was a weekly chore that had to be done. Securing those mats together felt like we were holding the team in place.

Eventually, I quit my job and moved to San Francisco to see how far I could get with fighting. This led me to training on many types of mats. Not just in California, but around the world. I learned what a wrist lock actually is, on some worn mats in Rio de Janeiro and warmed up on some portable mats backstage before UFC fights. I wrecked my knee training on tatami mats in West Hollywood and advised Google on roll-away mats to buy for employees in Silicon Valley.

By far the mats I’m most familiar with are those on 3rd street in San Francisco. El Nino Training Center is where I learned to fight. Those mats got me through a divorce and consoled me when my dog died. I went there to clear my mind after long nights of wrestling over my own shifting view of religion. And it was there that I earned my black belt in American Jiu Jitsu.

But in March, when Mayor London Breed stood in front of the cameras and said we had to “shelter in place”, those mats were no longer available. The gyms closed, and for the first time in 15 years I didn’t have mats to go to. Months dragged on and I felt out of shape physically and mentally. I needed a solution.

So my buddy Paul built a platform in my basement that would hold mats. I chose white, smooth, two-inch Zebra mats. You’d think white is a bad choice for a dirty basement, but it keeps me honest. Every piece of dirt is visible and reflects any lack of tidiness. If I get lazy it shows. And cleaning those mats is a physical representation of setting myself up for opportunity. Seeing them clean reminds me to come back and work.

The other night after training I was in there alone sweeping and thinking how good it is to have somewhere to grapple. I remembered those puzzle mats I had in Oklahoma and thought about how my life has taken shape on all those mats over the years. I laughed at the idea that during the pandemic, everyone rushed to stock up on food and toilet paper, while I bought mats. But I had to. Because I set out to see how far I could get in fighting. As it turned out, fighting is more than what happens inside a cage. And I’m still figuring out how far it will take me.