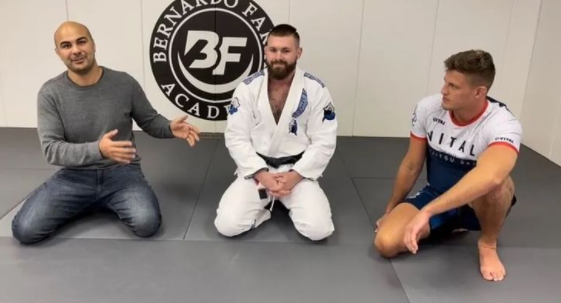 Gordon Ryan is often known as the No-Gi GOAT, and is rarely seen in a Gi nowadays; however, recently Ryan met up with some of the top grapplers in the Gi game. Ryan posted a photo on to Instagram with him wearing his Gi and black belt kneeled in between Bernardo Faria and IBJJF black belt world champion Nicholas Meregali. Ryan says on the post, “Last night was a very special night. I had the chance to train for the 1st time with @marcostinocobjj in the gi and @nicholasmeregali gi and no gi.”

Ryan sang praise to Nicholas Meregali’s jiu jitsu, “First and foremost, Nicholas has some of the best jiu jitsu I’ve ever felt. When I say jiu jitsu I don’t mean opportunistic spazzing into good positions. When I say good jiu jitsu I mean Deliberate and precise movement which creates constant pressure and dilemmas that work towards submissions.”

Meregali and Tinoco also trained in No-Gi with Ryan, getting out of their Gi’s and into a rashguard – but neither lost their ‘powers’,

“This is what grappling is about. If you change your clothes and suddenly lose half your “powers”, you’re doing it wrong.”

Ryan continues to make a point about grapplers who strictly train either Gi or No-Gi, stating that if you want to be the best at either, you must be highly competitive at both, “I believe that if you specialize In gi or no gi that you should be able to walk into the opposing field and be highly competitive with the absolute best guys In the world (provided you’re world class in one area). If you train consistently in the gi I don’t expect you to beat all the best guys no gi, but I do expect you to be extremely competitive, and vice versa.”

He goes on to back up his point, “This was the 1st time I’ve ever trained with someone who has virtually no no-gi training whatsoever, and sure, Nicholas’s 1st time training with a no gi only specialist (although I have a bit of gi training, but haven’t worn one in 3.5 years). Most people probably watched the clips and automatically assumed he crushed me in the gi and I crushed him no gi, but this wasn’t the case at all. We were both able to change clothes and give the other a very tough roll within the other area of expertise.”

Although they appeared to have given each other tough rolls, Ryan admits that obviously they both held advantages in their area of speciality but Meregali gave him “the match of a lifetime” Ryan continues, “Obviously we held some distinct advantages in our area of specialty, but we were able to give one another very hard rolls both gi and no gi. Nicholas took off his gi after doing a handful of no gi rounds in his life and gave me the match of a lifetime. This is what grappling is about. If you change your clothes and suddenly lose half your “powers”, you’re doing it wrong.”

Watch a video of Ryan and Meregali going through techniques below,