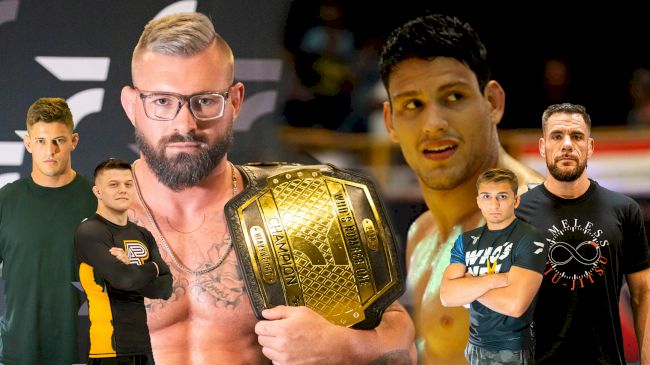 The next WNO card is stacked. After having several years off due to health problems, Ryan has proved that his skill hasn’t lessened, showed throughout his dominant display of grappling at the last WNO on July 14 against x2 IBJJF black belt World Champion Pedro Marinho.

The card will feature some of the most exciting and reputable names in BJJ such as: Jacob Couch, Jay Rodriguez, Mica Galvao, Alan Sanchez, Nicholas Meregali, Rafael Lovato Jr, Elisabeth Clay and many more.

One of the matches that is sure to get everyone hanging off the edge of their seats is Jacob Couch representing Pedigo Submission Fighting vs. Jay Rodriguez from Craig Jones’ B-Team, and younger brother of ADCC world champ runner-up Nick Rod.

Daisy Fresh’s ‘The Hillbilly Hammer’ Jacob Couch is an all-round grappler with a vast knowledge on leg attacks, however Jay Rod has a strong top game and a solid guard pass game as displayed at the ADCC trials so it will be interesting to watch these two young grapplers play against each others strengths and see who comes out on top.

Beatriz Mesquita vs. Elisabeth Clay is the first match of World Champion vs. World Champion on the card, and definitely could have been a main event on another night. Both fighters have extremely reputable backgrounds and a vast competition background, with Mesquita arguably having the best competitive record in both Gi and Nogi of all time having won 24 titles at black belt level in the four major Gi Championships. Clay on the other hand is a former F2W Heavyweight Champion as well as 2021 IBJJF No-Gi World Champion and IBJJF Pan No-Gi Champion. However, there is an obvious size difference between the two – will Mesquita’s skills outweigh Clay’s skills and the weight advantage? This one will be an interesting watch for sure.

There are so many incredible matches on this card and another stand out has to be Mica Galvao vs. Alan Sanchez. At just 18-years-old Galveo has some serious victories under his belt such as wins against the likes of: Tye Ruotolo, Jacob Couch, Lucas Barbosa, Pedro Marinho and Oliver Taza to mention a few. Galvao is also currently #5 on FloGrappling’s pound-for-pound rankings as well, which is pretty extraordinary for an 18-year-old. His opponent Sanchez comes out of 10th planet and is a current EBI champion and ADCC trials veteran. Both have been taught very different styles so it will be interesting to see how this match plays out.

Then to finish the night off will be an extraordinary, highly anticipated fight between ADCC world champion Felipe Pena and arguably the best no-gi grappler in the world, Gordon Ryan. It will be intriguing to see if either try to finish the match quickly or if Ryan will try to torture Pena into submission in this no-time limit, sub-only match. Felipe Pena is one of four grapplers to have ever beaten Ryan at black belt, (and Pena has beaten Ryan twice) so both have a lot to prove in this match; who will come out on top?

To watch Who’s Number One Pena Vs Ryan you can stream it on FloGrappling on August 7th.

Did you know US President Abraham Lincoln was a Hall of Fame Wrestler? Click here to read more.

Lucy Wynne has 131 posts and counting. See all posts by Lucy Wynne