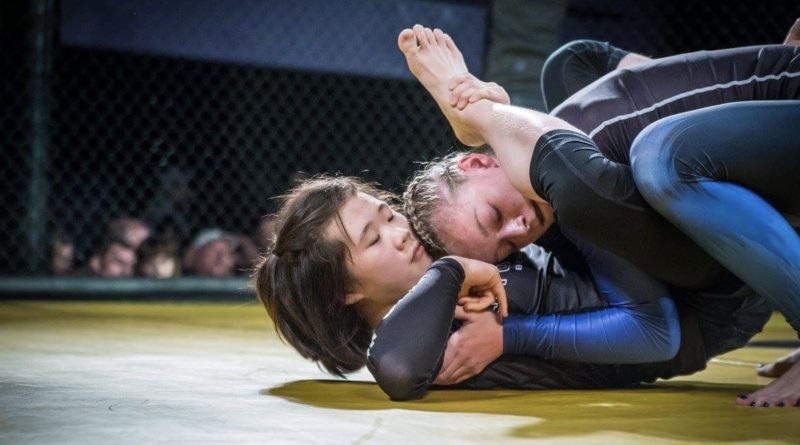 18 year old Grace Gundrum will have to put her school work aside on October 23rd, when she steps onto the stage to grapple 2X world champ, Pati Fontes. “Since this is my first time competing as a black belt,” Gundrum said, “I’m hoping to at least give her a good match and make it exciting.”

She gained notoriety last year at Quintet Fight Night 3. In that match, she took 4X world champ, Rikako Yuasa to a draw. Then, after her win against Danielle Kelly over the summer, she earned her black belt from 10th Planet.

“It feels pretty cool to be a black belt,” she said. “I didn’t think I’d get one so quickly since I had received my brown belt at the end of last year, but I appreciate that [my coaches] believe I’m good enough to be one.”

There was some controversy with Gundrum’s promotion in the Jiu Jitsu community. Some complained that she is too young to receive a black belt. In fact, IBJJF doesn’t recognize a black belt until the age of 19. And Gundrum’s quick rise in the belt ranks also clashes with traditional Jiu Jitsu measures.

However, like many schools, 10th planet isn’t exactly a traditional academy. It’s students normally compete in No Gi, sub only matches. And for Gundrum, who remains undefeated, it’s about what plays out on the mats that counts. But she’ll have to put her winning streak on the line this weekend, when she meets a true Jiu Jitsu traditionalist.

Fontes is a black belt under Lucas Leite. She started training in her hometown of Niterói in Brazil (a city bordering Rio de Janeiro), when she was 15. She moved to California in 2012, where she teaches at Checkmat BJJ in Long Beach. Fontes has a long list of medals, including gold at IBJJF worlds, in both the brown and black belt divisions. Although Fontes recently lost at F2W 153, there is no doubt she will be looking to come back to that stage with a mission.

“I personally don’t watch or research much jiu jitsu. So I don’t exactly know what it’ll take for me to win,” Gundrum said, when I asked about Fontes. “I do know [she] is really good though. So I am preparing for this match to be pretty tough.”

Gundrum will be thrown “into the fire” with her first test as a black belt. She’ll be looking to represent her team and new rank, but is aware of the road ahead. “I think competing as a black belt will definitely add pressure,” she said. “It’ll take a lot for me to live up to all the other high caliber black belts, that have been competing much longer than me.”

Win or lose, there is no arguing with the results she has produced. Gundrum has made a career of surprising people with her accomplishments. But Fontes is definitely one of those “high caliber black belts.” A win over her, would be yet another remarkable feat.