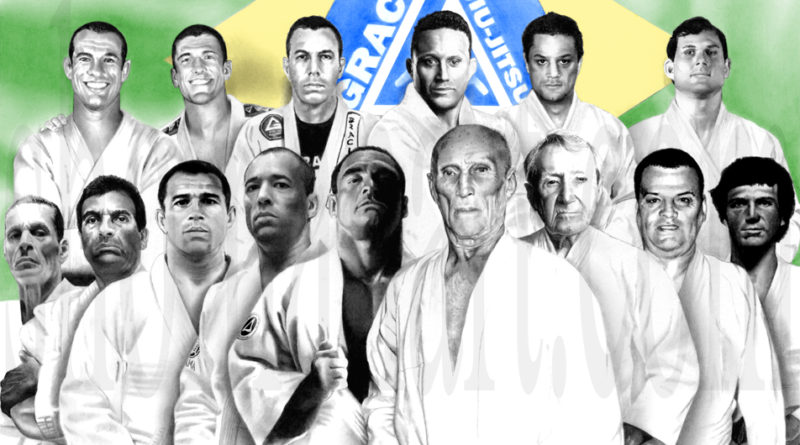 Go back around 100 years – yes, only 100 years – and that is around the time that Brazilian Jiu Jitsu was born. While the exact origins of Jiu Jitsu are hard to pinpoint, it was well established in Japan by the 17th-century. During this time, warring clans fought regularly and the warrior class, known as bushi or samurai, honed their combat skills into art. Jiu Jitsu was a complement to sword fighting, offering a means of incapacitating armored opponents. Jiu Jitsu got innovated over the next few centuries, and arguably the innovation made by the Gracie family had the biggest impact.

BJJ is a sport that heavily evolved from judo – which was formerly known as Kano jiu-jitsu in Japan, or just jiu jitsu. The difference is BJJ revolves around the concept that a smaller, weaker person can successfully defend themselves against a bigger, stronger, heavier opponent by using leverage and weight distribution on the ground, and using a number of holds and submissions to defeat them.

The story of Brazilian Jiu Jitsu starts with the Gracie family’s original teacher, a Judoka named Mitsuyo Maeda. Maeda was one of the Judo masters credited for bringing Judo to the nation of Brazil. Maeda was taught by Judo’s founder, Jigoro Kano and was one of the Kokodan’s top five groundwork experts sent abroad to demonstrate and spread Kano’s art to the world.

Maeda left Japan in 1904, visiting many countries and accepting challenges from fighters of various Martial Arts. Before going to Brazil, Maeda traveled throughout Europe teaching Judo. He earned the nickname Conde Komat (Count Combat) for his expertise in fighting. He arrived in Brazil in 1914.

Maeda’s efforts were aided by Gastao Gracie (a Brazilian scholar & politician) who also helped Maeda put on Judo demonstrations across the country. Carlos Gracie (Gracie’s eldest son) was enthralled with the techniques he saw and wanted to become Maeda’s student. So in return for helping him on his mission, Maeda taught Judo to Carlos, Carlos then taught the art to his four brothers (Oswaldo, Gastão Jr, George, and Hélio).

Helio was the smallest of the brothers, and arguably the most frail so he found the strength aspect of Judo difficult for his body size, leading to him and his brothers altering the judo techniques to make it more of a ne-waza (ground-based) martial art.

Due to his diminutive size and lack of strength, consequently, Helio began to make adjustments to the judo techniques he had learned, refining them until they could be applied by anyone, regardless of size or strength. It was from these innovations that BJJ was born.

Later, the family marketed their own self-defense system based on Judo and named it Gracie Jiu-Jitsu. BJJ eventually came to be its own defined combat sport through the innovations, practices, and adaptation of Gracie Jiu-Jitsu and Judo, and became an essential martial art for modern MMA.

BJJ in the USA

The art of BJJ continued to evolve over the years, eventually incorporating aspects of wrestling and other grappling arts into the curriculum. However, BJJ would remain relatively unknown outside of Brazil until 1972: The Gracie Jiu-Jitsu pioneer, Carley Gracie became the first BJJ instructor in the United States when he was invited to teach his family’s trade at the Marine Corps Base in Quantico, VA in 1972. His brother, Rorion Gracie, soon traveled to California in 1978 and began teaching private lessons almost immediately – Rorion’s garage training sessions would later become the subject of legends.

Brazilian Jiu Jitsu had to fight for its legitimacy and its practitioners did so in Vale Tudo contests. Vale Tudo fights were no holds barred fighting competitions between students of different fighting styles.

Translated from Portuguese, the term Vale Tudo literally means that anything goes. These bloody and violent contests would take place in Brazil from the 1920s to the late 1990s.

Many Jiu Jitsu practitioners fought in these contests including the Gracie brothers themselves. Younger brother Hélio was the more active of the two and he became famous in Brazil for fighting. His most famous bout was a loss to legendary Judo fighter Masahiko Kimura, whom he challenged. Kimura broke Gracie’s arm with a gyaku ude-garami, which BJJ practitioners then referred to as the kimura as an homage.

For many years, the Gracie family had a standing offer they called the “Gracie Challenge.” This was an open invitation to anyone that didn’t believe in the legitimacy of Gracie Jiu Jitsu to come fight them.

This was a thing routinely done in Gracie Jiu Jitsu school in Brazil that Rorion brought to the US. After the brothers established the first Gracie school in Torrance, California, they started advertising the Gracie challenge. Putting the invitation out to any martial artist or tough man that didn’t believe in the effectiveness of Gracie Jiu Jitsu.

Over the years, the Gracie family tested and refined the art of BJJ through participation in challenge matches – contests with few rules that pitted the Gracies and their students against practitioners of other martial arts. The Gracies rarely lost.

In the early 1990s, Rorion Gracie collaborated with promoter Art Davie to create an eight-man single-elimination tournament for the purpose of showcasing the effectiveness of Gracie jiu-jitsu against other martial arts. A no holds barred contests (similar to the vale tudo matches the family had previously participated in) between fighters of different backgrounds to fight in a 1 night tournament for $50,000. The event was to be televised and would aim to publicly determine the best martial art.

The inaugural tournament took place on November 12, 1993. Rorion’s younger brother Royce served as a combatant in the tournament, representing the family’s martial art. Despite being the smallest competitor, Royce was able to win all three of his matches, and was crowned champion.

As more events were held, Royce would go on to win two more early UFC tournaments. The number of Jiu Jitsu practitioners within the world increased exponentially overnight during the early 90s. The UFC, co-founded by Rorion Gracie and Art Davies, soon launched BJJ into popular culture.

Watch the video below to see Royce Gracie fight in the early days of UFC.

Lucy Wynne has 119 posts and counting. See all posts by Lucy Wynne