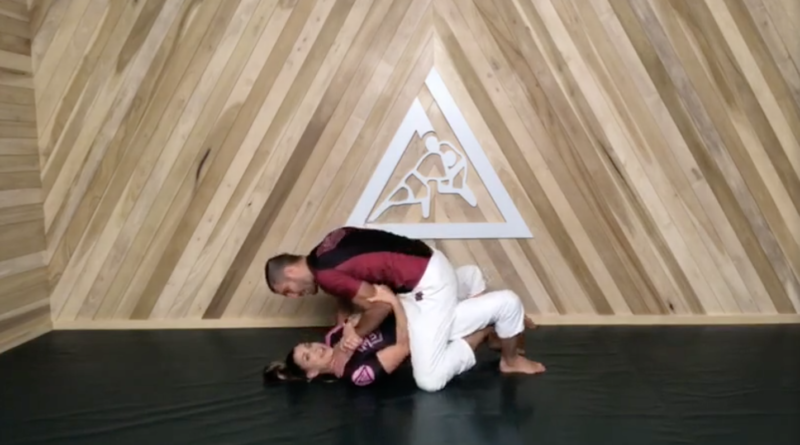 Rener and Eve Torres Gracie held a free, two-hour self-defense seminar for Gracie University via Zoom on Sunday, Nov. 1, 2020. They designed it with the beginner in mind. The rationale for the free “super seminar” was for untrained people to benefit from BJJ training. Especially mentioned were assault victims, police officers, and “fencers,” Jiu Jitsu or MMA fans on the fence about training. Here’s a recap of the techniques and concepts they shared.

Here’s the link to their Instagram video of the full seminar.

As is typical of martial arts seminars or classes, it started with mobility exercises. They explained these movements were not merely movements to warm up, they were part of the techniques. The exercises included rocking back-and-forth, pivoting off your back on the ground with a defensive posture, bridges, shrimps/hip escape, shoulder walks and knee rotations.

One of the best things that the Gracie University instructors do well is explain the concepts behind the techniques as well as the rationale in detail. For the classic technical stand-up, they started by defining personal space. Then they explained how the usual method of standing up from a seated position leaves one vulnerable to shoves and strikes. One detail they shared is that “parallel feet” leave you unbalanced and “tippable.” Getting up by doing the technical stand-up allows you to be in a more stable posture at every stage of getting up as well as allowing you to cover your head.

This is a variation of the technical stand-up which allows you to end up at a greater distance from the attacker. The main differences are the posting of both hands back and the front leg hops back just before the back leg, which allow you to hop both legs backward and away.

The next technique shared were variations of mount escapes. The first one was the fundamental “trap and roll” against someone trying the common front choke. Also shared was a variation for an aggressive striker where you have to get yourself protect yourself by hugging the attacker. A great detail shared was that immediately after reversing, post both hands on the hips and jump back into combat base. This protects against being trapped in the attacker’s closed guard.

Distance Management and the Body-Lock Takedown

One of the most crucial concepts of self-defense is distance management when facing a violent attacker. In the striking arts, the ideal distance to attack is called “the pocket.” For self-defense, you want to be either too far to be struck (typically beyond six feet) or within takedown distance. Concepts and details shared included maintaining safe distance, foot positioning, never crossing your feet and head positioning. The main technique was the body-lock takedown.

As Rener said, the Americana from the mount is a fundamental technique taught to Jiu Jitsu beginners. In the Gracie University, he said it’s lesson two. It is a basic shoulder lock but they go into great detail about angles and limb positioning.

Distance Management on the Ground

They broke down the different distances on the ground by “stages.” Stage One is a tight closed guard with the attacker’s head and an arm wrapped. Stage Two is pulling both of the attacker’s arms with your shins blocking and pushing into their biceps. Stage Three is with the knees together pushing into their chest and your hips elevated to keep them at bay. Stage Four is with both feet on their hips. Lastly, Stage Five is with the attacker disengaged, but you are constantly facing them with a foot at the ready and following them by pivoting.

This seminar’s target audience was for the untrained, for those interested in self-defense and for police officers. That’s not to say that the Jiu Jitsu hobbyist would not benefit from participating. Everything they shared may be fundamental, but they are worth practicing over and over for competency and mastery. It was worth the two hours and is recommended for anyone.