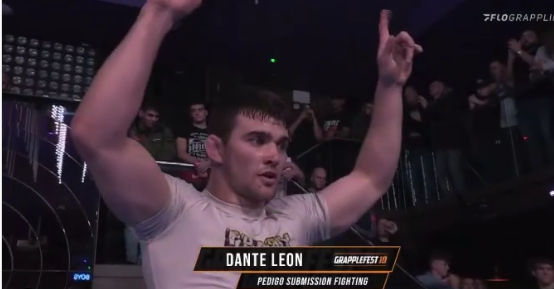 On Saturday, November 20, the UK-based promotion Grapplefest returned to action with Grapplefest 10, live from Liverpool, England. In the main event, Dante Leon picked up a clear but competitive decision win over Oliver Taza, and both Tye and Kade Ruotolo earned decision wins over high-level competitors. All of the matches were submission-only.

Now an official representative of Pedigo Submission Fighting, AKA “Daisy Fresh,” Dante Leon showed off his world-class top game against recent ADCC European Trials winner Oliver Taza. Leon used a steady diet of pressure passing to not only shut down the dangerous leg locks of Taza, but also pass his guard. Whereas Taza typically faces opponents that are too cautious to enter his guard, Leon waded into the danger, using both a knee cut and body lock pass to keep Taza on the defensive, despite Taza’s constant efforts to create leg entanglements. Leon’s aggressive efforts from top position earned him the judges’ decision.

The co-main event saw Kade Ruotolo, fresh off winning the ADCC East Coast Trials, continue his winning ways against ADCC veteran Keith Krikorian. Ruotolo controlled position throughout, despite a handful of leg entanglements achieved by Krikorian from his guard. With just over two minutes left in the match, Ruotolo secured Krikorian’s back and, for several moments, appeared close to landing a twister. Krikorian eventually escaped, but ultimately Ruotolo earned a clear-cut decision win.

Kade’s twin brother Tye Ruotolo took on Matt Serra black belt Nick Ronan. After some grappling on the feet, about midway through the match, Ronan secured a deep leg entanglement after a perfectly-executed flying scissor takedown. Ruotolo quickly turned that entanglement against Ronan, though, taking Ronan’s back where he would stay for the next couple of minutes. Ronan pulled guard again late in the match, but in the end Ruotolo was the more aggressive and effective grappler, securing the judges’ decision.

Ben Coate has 585 posts and counting. See all posts by Ben Coate