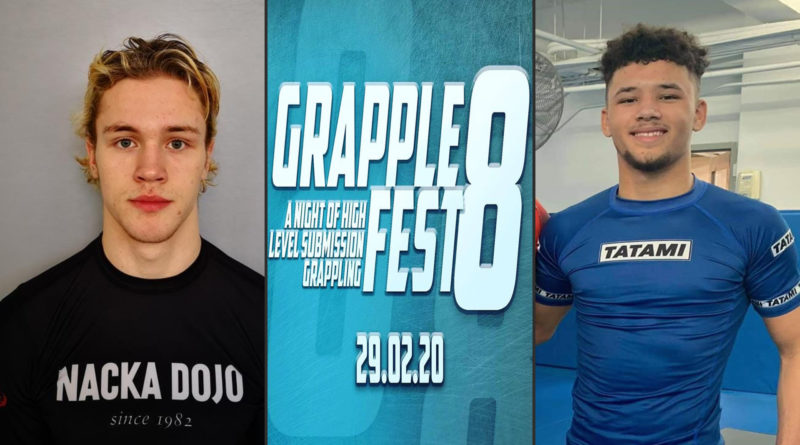 Grapplefest 8 has now finished and the full results can be found here.

Grapplefest 8 comes to Liverpool this weekend with another stacked line-up. The promotion really has gone from strength to strength since Grapplefest 1 and yet again they’re returning with a potent mix of premier local talent and marquee names from across the world. Recently, the bombshell of Figure 4 promotions partnering with Third Coast Grappling for a co-promotion on May 23rd was announced. ‘The American Invasion’ will be the biggest card to date with Gordon Ryan, Kyle Boehem, Nick Rodriquez, Lucas Barbosa already announced and many more HUGE names to come! Grapplefest 8 presents an opportunity to impress and possibly earn grapplers a place on the undercard of the big show. It’s a massive opportunity for talented grapplers to finally ‘break out’ and get the chance to build a name on a show which is guaranteed to have a large audience across the globe watching.

Every website under the sun will be doing a preview that features known names and the big stars on the Grapplefest 8 card. Instead, I’m going to break down some lesser-known names (and matches) that you should keep an eye on ahead of the big names.

Eoghan has been making waves in the UK for quite some time now and has a submission win over what is arguably the UK’s premier submission grappler at the moment – Ross Nicholls. He’s featured on big shows in the UK like Grapplefest, Pantheon and Polaris before and has yet to really showcase what everyone knows he’s capable of on the big stage. Mathesz is a European ADCC Bronze medallist, narrowly missing out on gold losing to common opponent Ross Nicholls in the semi-final, by refs decision. He’s a seasoned competitor and regular takes gold in both Gi and Nogi when IBJJF venture to Poland. This is my pick for fight of the night at Grapplefest 8!

Tyreeze, also known as ‘Wonderkid’ really has started to live up to that nickname in the past 12 months. At just 16 years old, he really is a look into the future for the UK submission only scene. After a seasoned stint competing as a Juvenile, culminating with Gold at Naga Europeans and ADCC British Championships, he’s gone on to make a name for himself traveling Europe with Grappling Industries. He really embraces the anyone, anytime mentality and if you take one look at his Instagram you’ll find clips of him submitting brown and black belts, sometimes twice his size regularly. Aidan, for most is the unknown. As it happens, I myself competed against Aidan 5-6 years ago… albeit in a Gi division.  He’s incredibly well rounded and has a wicked guard game, more recently he seems to have added an arsenal of leg locks to his game winning by heel hook at Grapplefest 7 and winning Empire Grappling’s Elite division with a couple of knee bars en route.  This is an interesting one, if Aidan can survive Tyreeze’s early leg lock onslaught things are going to get interesting very quickly and we’ll get an opportunity to see if Tyreeze is well rounded or runs out of ideas if plan A doesn’t work.

I’m going to be straight with you here… I don’t know a ridiculous amount about Jack other than the fact he’s game and wins on submission only shows incredibly frequently. The real reason I’m interested in this matchup is another young prodigy, Liam Alpang. He’s gained some serious hype in his native Sweden and has been venturing across the pond recently. He really caught my eye at Empire Grappling’s Road to Pantheon where he walked through every opponent with relative ease to earn a place on Pantheon 3 in May… if rumours are to be believed that’s another UK show that’s going to be headlined by huge names. Both have exciting styles and will push the pace from the start, let’s see if the underdog can pull of the upset!

This is an old school clash of styles that’s guaranteed to be fast paced. Chris Walsh is a Grapplefest and Polaris veteran and was recently awarded his Black Belt from Next Generation MMA Liverpool, he’s used to the Grapplefest stage and will be looking for a dominant victory in front of his home town crowd. The challenge he faces is a daunting one. Ellis for me, is probably the UK’s premier Brown Belt at the moment. He’s part of Darragh O’connell’s ECBJJ travelling squad of top competitors who regularly medal at the top IBJJF and UAE competitions. Ellis has ran his own gym for quite a while and was making waves even before Darragh became his head coach. However, it’s since he became part of the team that’s fronted by Ffion Davies that he’s started to make real waves.  He took gold in the incredibly stacked Brownbelt lightweight division at the IBJJF Nogi World Championships and won IBJJF Euros as a purple belt.

I’m taking a bit of a punt on this and I’m going to apologise in advance if this ends up being ‘Schaub-shutdown’ borefest.  This is going to go one of two ways; Jack and Declan throw caution to the wind and have the fast paced match that resembles grappling version ‘button bashing’ on Mortal Combat/Tekken. Don’t get me wrong, both guys are technical – but I’ve seen them both decide to get into wars where scrambles are exchanged quickly. The other, more (boring) unfortunate scenario is Jack plays from the bottom and Declan looks to play smart, which results in both guys neutralising each other.

You’ll find my beautiful face coaching Carl Conway in the 5th match of the night, when he faces dangerous leg locker Jack Brown.

Grapplefest 8 is live on flograppling on Saturday 29th February from 4pm (GMT), the full stacked card can be found below: