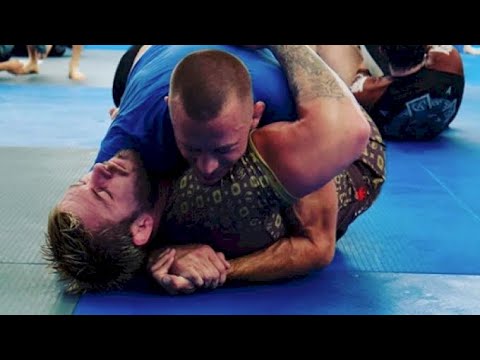 Georges St. Pierre (GSP) was the inaugural guest on The King Ryan Show, hosted by Gordon Ryan on behalf of FloGrappling and he had some fantastic insights to share about his fight philosophy and more. There could not have been a better guest for the premiere of The King Ryan Show, as GSP has represented Tristar Gym for a number of years with head coach Firas Zahabi being a black belt under the man responsible for Gordon Ryan being in contention for the title of greatest No Gi grappler of all time, John Danaher.

Danaher has also been St. Pierre’s BJJ coach and cornerman for many of his fights, with GSP actually receiving his brown belt in BJJ back in 2006 from Danaher’s coach and founder of his New York academy, the legendary Renzo Gracie. Perhaps predictably for a student of Danaher’s, Firas Zahabi has even gone so far as to name the Renzo Gracie Academy in New York as the best BJJ school in the world, in his opinion.

As a result of their close links, GSP and Gordon Ryan have trained together on numerous occasions, something Ryan alludes to early on when he asks St. Pierre to explain his reasoning for choosing to train with specialists in every field, instead of with fellow MMA fighters. GSP then explains that he feels as though this helps him keep his ego in check and motivates him to beat these specialists in their own area of expertise.