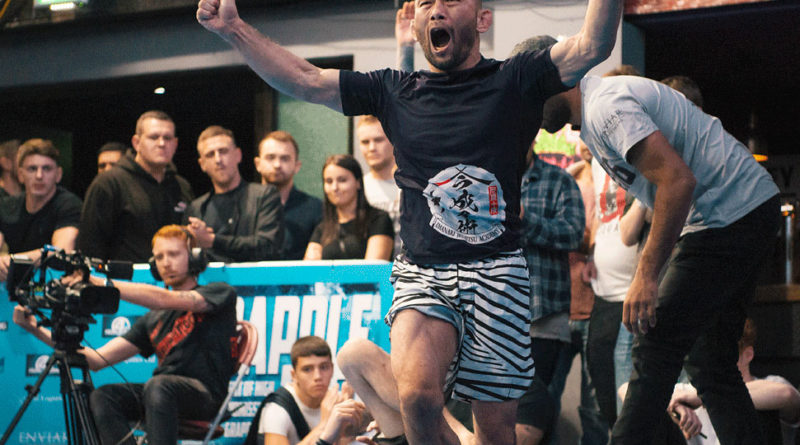 For more amazing pictures from the event check out Fotorolls photography.

For the second event of the series Herby took on Daniel Strauss – BJJ Black belt, S&C savage and host of the Rasberry Ape Podcast.

Grapplefest continued to live up to the hype and 17 of 27 matches finishing by submission. Many of the matches that went to decision were also barn burners with the match between Lee Simpson and Paul Lukowski being fight of the night.

Match-ups for this event proved trickier to predict correctly than our Polaris 11 predictions. Both Herby and Dan correctly guessed the result of 4 matches – Herby edged the overall score this week by correctly guessing the method for all 4 of his correct predictions, compared to 3 for Dan.
Herby – 20 points Dan – 18

Joao and Paulo Miyao are storming to the UK to headline (and co-headline) Grapplefest 6.

Joao enters the match coming off a dominant display at KASAI Pro 6, but had a controversial EBI overtime loss against Geo Martinez prior to that. This time out he faces highly experienced black belt savage Frank Rosenthal in what should be an extremely fast paced match. Paulo has had an equally busy year as his brother, but has been slightly more Gi focused than his brother. He faces Polish stand-out and ADCC veteran Kamil Wilk who will be looking to test the urban legend of Miyao foot flexibility.

Herby’s prediction: Jaoa’s nogi game seems to have evolved recently. Frank is tough, but I can see Joao getting the submission late into the match
Dan’s prediction: Joao by decision

Herby’s prediction: Both Miyaos are virtually un-tapable. I think Paulo will be too much for Wilk and will dominate and win by sub
Dan’s prediction: Paulo by sub

Herby’s prediction: Classic old school v new school match. Iminari is tough to sub, but I think Eddy will be too much to deal with and win by decision
Dan’s prediction: Eddy decision

Herby’s prediction: Tom is incredibly dangerous, but I reffed his match against Ross Nicholls and he’s hard to submit. I’m going to gamble and say he’ll win by decision
Dan’s prediction: Caughey by submission

Herby’s prediction: Corkhill is probably the guy who is flying under the radar most in the UK. His flexible game is a headache for most grapplers and that combined with his dangerous leg game should equal a win by submission
Dan’s prediction: Butler by decision

How did Herby do last time?

Last time we took on match maker and head honco of Grapplefest Chris ‘Tommo’ Thompson to predict the results of Polaris 11.

Scores have been added to the table(s) below.