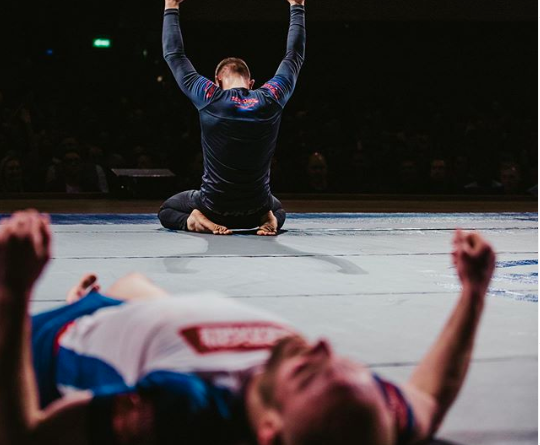 For the inaugural week Herby took on Chris ‘Tommo’ Thompson – Nemesis grappling head coach and main man for GrappleFest . Speaking of which Grapplefest 6 is live on FloGrappling  September 7th, headlined and co-headlined by Joao and Paulo Miyao.

Not all’s bad for Tommo who had a friendly side-bet with Kristian Woodmansee over the winning method for the co-main event.

Ffion Davies’ main event credentials will be tested on Saturday as she takes on multiple time world champion Talita Alencar at the Manchester Bridgewater Hall.

Ffion heads into the match on a hot streak after being crowed Polaris champion and becoming the first European to win the Brazilian Nationals . Talita on the other hand will be looking to replicate the last time the two faced in a submission only format, where she won via RNC at EBI 12. Ffion’s crushing style has matured since their first meeting, so this match will be a measuring stick of her progression in the last few years.

The rest of the card is also stacked with Mansher Khera defending his title against Edwin Najmi and UFC stars Chris Fishgold and Stevie Ray, to name a few.

Tommo’s prediction: Davies by submission – Just another nights work for the Welsh wizard!

Tommo’s prediction: Edwin is one of my favourite guys to watch and I can’t see him finishing Munch but I think he will dominate   (Najmi by decision)

Tommo’s prediction: I can see Paddy getting the better of the transitions and if he gets Stevies back it could be a tough night, but he looks very hard to finish (Pimblett by decision)

Tommo’s prediction: Nicky is an animal training with the best guys in the World and has a huge size advantage which I think will be the deciding factor…sorry Ben! (Rodriquez by submission)

Tommo’s prediction: Tommy is very very good but Marco’s closed guard is exceptional in the Gi and I can see him transitioning to lasso and dominating the match from there (Tinoco by decision)

Tommo’s prediction: I think Fishys grappling is really solid and can see him winning with either a guillotine or RNC (Fishgold by submission)

Tommo’s prediction: DRAW –   I’m on the fence for this one as I know both guys really well personally and trained with them…. I can’t pick a winner

Tommo’s prediction: Hopstock is dangerous as we saw when he submitted Eoghan but I think Sean’s pace and passing will get him in position for a finish (McDonagh by submission)

Predictions have been done by Herby based on knowledge, match-up and differential to guest in mind.

This article will be updated after the event with scores and results. GI will also have live updates and interviews on the night.