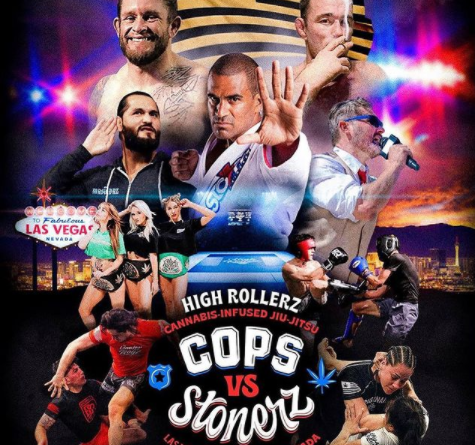 The dopest martial art tournament in the world, High Rollerz, has come back for its seventh edition, taking place soon on 18 September with a special ‘Cops Vs Stonerz’ event, and a middleweight super championship bout between Mitch Aguilar (Team Cops) and Jake Shields (Team Stonerz) being the main event. Providing commentary for the night will be Renato Laranja and Tom Natt with special guest commentators: 3rd Degree Black Belt Robert Drysdale and UFC champ, Jorge Masvidal. The tournament will be held in Las Vegas and can be watched on Bare Knuckle TV on September 18th at 7pm PST. You can watch live on the BKTV app or purchase tickets here.

Marijuana is now legal for adults in 18 states of the U.S and medical marijuana is legal in 37; the progression of cannabis in the U.S. is what has allowed such an event as a grapple battle between ‘Cops Vs Stonerz’ to take place, and boy are we grateful.

High Rollerz is also partnering with Adopt A Cop BJJ — a nonprofit organization that pays the academy fees for police officers looking to learn jiu-jitsu. ‘Stoned’ competitors will compete just as if it’s a typical High Rollerz event, openly smoking immediately before stepping on the mat. Those stoned competitors will then face sober, active police officers in jiu-jitsu matches under the EBI ruleset.