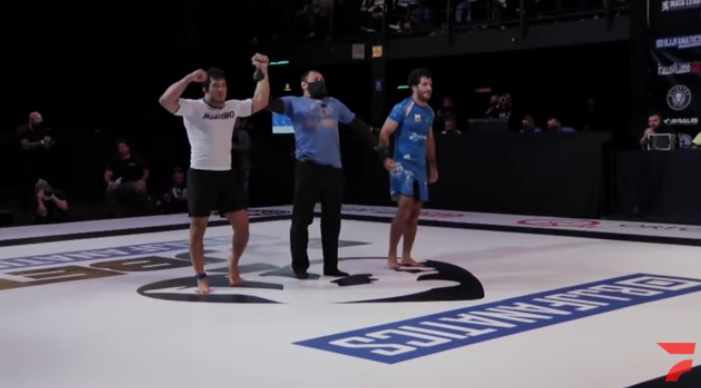 On Sunday, August 1, Lucas “Hulk” Barbosa won the BJJ Bet: Who’s Next no-gi grand prix, defeating three opponents in one night, including a submission win over Leandro Lo in the finals. It was one of the better overall competition performances of the year, and certainly Barbosa’s best showing of 2021. FloGrappling has released a highlight video of Barbosa’s three matches at BJJ Bet; watch that video below.

In the first round, Barbosa squared off with Servio Tulio. Barbosa used his trademark guard passing and top game to secure the back, earning all the points he needed to move on to the next round. In the semifinals, Barbosa met Mauricio Oliveira, who had just beat phenom Mica Galvao in the quarterfinals. Again, it was the strength of Barbosa’s guard passing that carried him to success, as he was able to move to mount and quickly latched on to an arm triangle choke for the win.

In the finals, Barbosa met seven-time IBJJF world champion Leandro Lo. After a contentious few opening moments on the feet, Barbosa secured a takedown, immediately moved to Lo’s back, and sunk in a rear-naked choke for the victory and grand prix championship.

One of Atos’ top competitors, Lucas Barbosa has been incredibly active this year, competing in a wide variety of rulesets and competitions. Prior to his appearance at BJJ Bet, Barbosa dominated William Tackett at The Road to ADCC, winning by an astonishing 33 points.