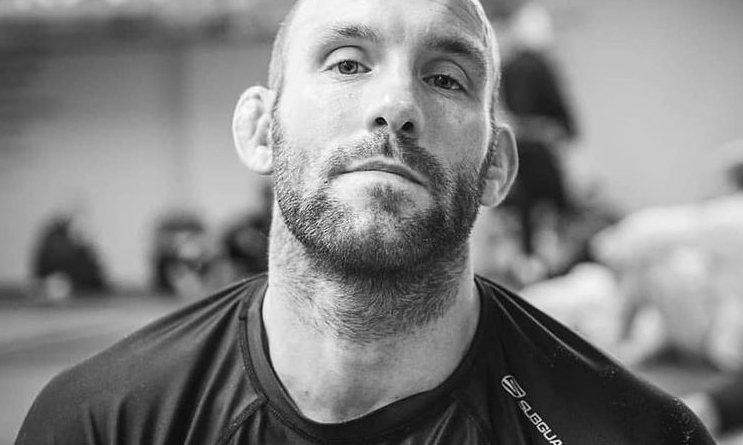 Grappling Insider speaks with Steve O’Keefe a 1st Degree Black Belt under Marco Canha at Checkmat and pro MMA fighter from Kent, England to discuss his career, how he kept focused and what the key to success in BJJ is. As well as an avid Brazilian Jiu-Jitsu competitor and pro MMA fighter O’Keeffe also takes a lot of pride in his coaching, and runs his own gym called Revolution Martial Arts in Kent, England.

O’Keeffe started training BJJ early-mid 2010 and entered his first MMA fight mid-2010. Prior to training MMA O’Keeffe had vast experience in martial arts including: Muay Thai, Boxing, and Taekwondo. He started coaching jiu-jitsu as a blue belt in 2011, and five years later O’Keeffe was awarded his black belt in 2016. At black belt Steve has been unbeaten in BJJ (except open weight divisions) and won double gold in the IBJJF London Winter Open in both the Gi and No-Gi – all submissions.

“I’ve been doing martial arts for my whole life. I started with Taekwondo when I was 9 years old and then I went into a bit of Boxing, a bit of Muay Thai. Then I moved out of London and there was nowhere to do any martial arts so I started playing football and I played at quite a good level. But I got sick to death of playing football and then in 2010 there was an MMA gym that opened up near my house.”

A calling to get back to his roots O’Keeffe continues, “Because I had competed in sport my whole life, my intention was just to compete straight away. That’s what I always do – no matter what the sport is – I just want to compete in it. So I said to the coach ‘I want to fight’ and he was like ‘yeah yeah yeah’, thinking I was talking nonsense. I started training and I think after about three months he took me seriously, and obviously I had boxed and done a bit of Muay Thai before, and competed at a very high level in Taekwondo like national and international level, so my coach said right if you want to fight MMA, you’ve got to do jiu jitsu, and I started doing jiu jitsu as part of my training, so from then on about two months in I was training every single night. One of my mates Adam was a blue belt and on my first lesson I was training with him and he absolutely tied me in knots, and he must have been about 65kg at the time. I was like – yeah, ok – this is what I want to learn.”

Consistency is the Key to Success in BJJ

What is the key to success in BJJ? The only person who can really answer this question is someone that has had huge success themselves in the sport and a black belt is the epitome of success in BJJ. When confronted with the question, O’Keeffe states , “Do you know what? People would take the piss out of me for saying this, but it’s consistency. It’s a word that comes out of my mouth so so much. My students take the piss out of me for it, but it is just that. You see very very average people improve so quickly just by being consistent.”

It’s known that to be successful in BJJ you need to not only have technique, but strength, agility, flexibility, and stamina as well but above all, the true key to success of BJJ and anything in life is consistency. Keep coming back and coming for more. O’Keeffe expands,

“Like myself, I’ve always been quite gifted – a gifted athlete – I can take up any sport and just get on with it. Tell me what the rules are and I’ll get up to do it. Other people that aren’t from a sporting background can’t necessarily do that and the attributes that I lack I make up for in other places. Some people naturally can’t do that; whether it’s a genetic thing, the kind of skills like: agility, strength, and speed that come into it – I can make up for certain things with those attributes but other people can’t and they just have to be consistent and learn the skill and get strong.”

Being a pro MMA fighter and trained in a lot of different martial arts disciplines I was curious as to how O’Keeffe kept a balance between all of the disciplines when training. Living up to his consistency principle O’Keeffe explains, “I just trained as much as I could. At the time I was a plumber. I was working for a company so I wasn’t getting home from London until about seven o’clock and I would go straight to the gym, and train until about half past nine. I go home get up and do it all over again. So I was still training three hours of an evening. Maybe a little bit more sometimes. Three and a half hours in the evening and then obviously training on weekends probably from 9-12 so I was getting enough of everything, but to be honest it only went on like that for about a year until I jacked in my work and just trained full time.” Commitment and dedication falls into the bracket of consistency, and those are the main principles of any martial arts.

The first step to success is starting the venture. Sometimes starting BJJ can be the most daunting thing above all, but one piece of advice O’Keeffe would give as a coach is, “You’ve just got to keep your mind open. You know what it’s like. The first time you train – it’s daunting – it is, it is. Again, it’s the same thing as the first time someone goes to a gym and they’re on their own.” He continues, “The thing is, it’s an intelligent person’s sport. Again, fighting is in general isn’t. An open mind. People just need to have an open mind. You take that first jump and you realise everyone is actually quite friendly.”

I think a lot of people can get deterred from starting martial arts, especially women because it’s something new isn’t it? It’s not something a lot of people do do so people might want to start it or try it but then never follow through with it because they’re a bit scared. Let’s face it going anywhere new on your own is always a little intimidating. O’Keeffe advises to bring a friend along,

“ It always helps when a friend has done it. I always hear the story a lot – I’ve been wanting to try this for ages but I didn’t and then I heard my friend was doing it so I joined in – and like there’s always that. There’s always the fact that you can just bring a mate along. Go and try it with a friend. Worst case scenario you’re going to have a f*cking laugh at eachother. Then in two years time you’ll be like remember that time we went and did jiu jitsu. The best thing that’s going to happen is that you will carry on doing it for the rest of your life. I’d say bring a friend along, just again, like you said earlier – have an open mind. Again, one of the biggest things I get is people in the warm up worrying what everyone else thinks of them doing forward rolls. Nobody gives a fuck. Everybody is so worried about themselves that they’re not going to look at you not being able to do a backwards roll. In three weeks time you’ll be doing it. “

When people struggle in class, if you see it – you help them out. You need to care less about what others think and care more about what you’re actually doing. When talking of people feeling away about struggling when beginning BJJ O’Keeffe says, “I bet the first thing you do is help them. Someone doesn’t know how to hip scape you’re going to show them. Inverted rolls, that’s the warm up one that is very hard for beginners to pick up. My guys are on it. If they see a beginner not being able to do it my students will bring them out of the line and show them how to do an inverted roll and then the next time they’re doing it, the next session or the next week they’ll be helping them again.”

One of my reasoning’s for starting BJJ was for self-defense, like I’m sure many other people’s were too. Being trained in various martial arts, we asked what O’Keeffe would consider to be the best martial art for self-defense. He states that he would agree that BJJ is the best martial art for self-defense, “Yeah. I would. My theory is, if you take a situation of a big male and a small female. You punch a big man in the face – it’s probably just going to annoy him isn’t it? But you will probably be able to choke him out – there’s no doubt about that – you will be able to choke him out – it’s as simple as that.” When you’re against an untrained opponent, as a small opponent you’re at a much greater advantage of being able to execute a choke than a KO – let’s face it.

Being a jiu-jitsu based MMA fighter who trains both in the Gi and No-Gi, O’Keeffe would consider the best submission is a choke. He explains, “ For me – everything I do is to get to the back. I want to get to the back and choke somebody. Because that is the one position; do you know what? When I was a white belt I watched a Robert Drysdale DVD and this is what he said, and it’s stayed with me ever since – “the back is the one position where you have no offense. You only have defense.” so it’s the most dominant position isn’t it? The fact that choking somebody is a lot easier than trying to break their arm because it’s just an easier submission to apply, you’ve got a lot more control, so everything I do is to get to the back. Every guard pass I do, everything I do is to make you take your back off the floor. I’m going to say the back.”