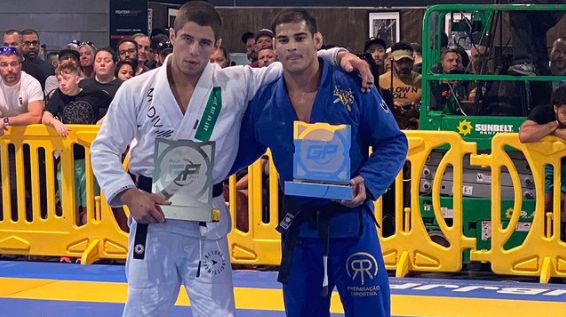 On Saturday, November 13 at the IBJJF’s Jiu-Jitsu Con, eight elite jiu-jitsu players — four middleweights and four heavyweights — competed in mini tournaments, each with a $20,000 purse on the line. Rookie black belt Tainan Dalpra took home the gold at middleweight, while Victor Hugo won the heavyweight division.

In the opening round of the middleweight division, Dalpra squared off with Checkmat’s Renato Canuto. Dalpra was able to implement his pressure-oriented, methodical top game to control the fast and athletic Canuto on his way to a dominant 9-2 victory.

An Art of Jiu-Jitsu product, Dalpra is still in his first year as a black belt, but already sports an impressive resume. In addition to this grand prix win, Dalpra was a 2021 Pans champion and a EUG grand prix runner-up.

Victor Hugo used a methodical, relatively conservative approach in his first round match against Gustavo Batista. Hugo worked from top position, and though he never passed guard, he was able to force Batista largely on the defensive. Hugo ultimately defeated Batista by one advantage, advancing to the finals against Mahamed Aly.

Hugo was aggressive early and often against Aly, attacking from his back while chasing leg entanglements. About two-and-a-half minutes into the match, Hugo secured what appeared to be a straight ankle lock, getting a painful tap from Aly. Aly protested the finish, and on replay, the submission appeared to be a twisting Aoki lock; Aly’s heel had slipped out of the straight ankle lock.