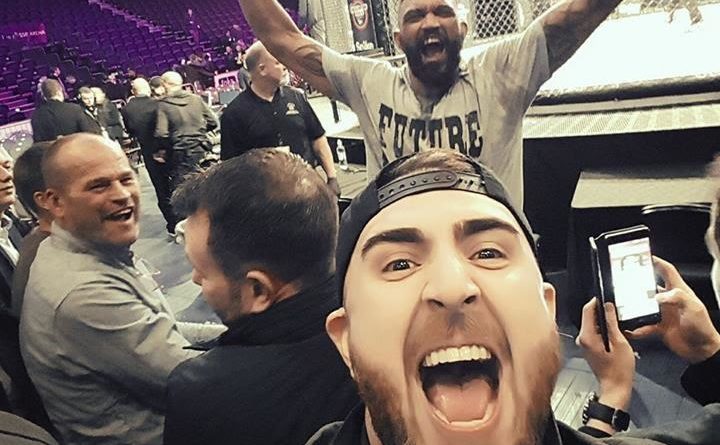 We’ve all heard of ‘The Mitchells’ and ‘The Macdonald’s’ -every town has that family who everyone has heard of. Well, in Andover, ‘Bilgic’ is that family!

Today, I meet up with Tarik Bilgic, owner and helper of several local businesses and former co-creator and coach at Xion Gym, BJJ Blackbelt under Roberto Almeida – Tarik joins me today telling me all about family life, his father passing away and how he’s looking forward to his next challenge on Battle Grapple 5 (July 27th) taking place at The Leatherhead theatre, following a battle of his own with his knees…

So – before I go into the interview, I just want to talk about Tarik for a minute. I have had the privilege of knowing this man for a very long time now, he has always ran about 100 businesses and has this swag about him, which is very rare to find these days. Walk down the road with him and literally, every 30 secs he’ll be shaking hands or wishing someone well. Andover, is quite firmly his home. A hard-working man, who helps supports the businesses his Father set up, whilst also working full-time for a local health plan company. To add some spice to this, he also set up his own BJJ team, which originally, was under ‘Phoenix MMA’ owned by Jimmy Johnstone, which then was fronted by the legendary Fernando Terere, this slowly evolved into ‘Xion Gym’ who Tarik was proud co-creator and coach with fellow blackbelt and close friend, Chris Duncan-Smith. Xion’s chief and lineage was spearheaded by the also legendary Roberto Almeida, Tarik’s first professor in BJJ. (Xion means – to go back to the source – a notable tip of the hat as he started with Roberto, then Jimmy – who appointed Fernando, then after Phoenix MMA, Tarik co-created Xion (with Chris) who was led by Roberto)

Recently Tarik has publicly left Xion, this was a hard decision to make as he has personally coached, mentored and helped lots of the members there, but as you’ll see later, he’s left on very good terms and for good reasons.

Tarik still trains under the maestro – Roberto Almeida, (blackbelt under Amaury Bitetti – who’s Professor is only – the actual Carlson Gracie Senior… a lineage which Tarik is very proud of (Of course…who wouldn’t be!).

Tarik recently left the gym he helped build and I was interested to see where his mindset is, where it’s been and what his plans are for the future… this is where the interview begins…

I walk in and Tarik looks in phenomenal shape, maybe the shirt was a size too small…who knows, but – looking huge! He has this ever-present smile and will always greet you with a hello, handshake and a hope you’re doing well. This Tarik seemed different to the one I was used to. He is always chirpy, optimistic, friendly etc – but today he just looks happier and healthier…

Hello mate, how you doing buddy, you look in great shape, what you been up too?

TARIK: Yeah man, I’m real good thank you bro, I’ve been trying a slightly different regime to the usual, gone down from 114kg, down to 101kg, I have about 6 weeks to get down to 97kg, so I’m well in reach of that. I say that – I was 101kg yesterday, after a massive roast! – so its all good.

So, what are you doing different?

TARIK: well, I’m basically following a State wrestling plan. I’m doing way more lifting and strength training, not worrying too much about my diet, basically. I’m just not worrying about anything the same way I used to!

Well you’re looking in great shape bud, do you know much about Danny Lewis – the guy you’re facing at battle grapple?

How you feeling about it all? I know you’ve had some knee surgeries recently on both your knees, how they holding up?

TARIK: Well, I only got my left one done 6 weeks ago! My other one was done a little bit before that, I was supposed to get them done a couple of years ago, but didn’t as my dad fell ill and had to undergo emergency chemo. I looked after him at the time and if I got my knees done then, well, I wouldn’t have been able to look after him. Then, after he passed away, I thought I was going to get them done again and unfortunately, my uncle passed away too. I was in a really dark place and didn’t think about my health, I put on some weight and went up 114kg!

So, how are you now?

TARIK: you know what mate – great. Genuinely – great. I’ve realised, time is finite and there’s this one thing my dad used to tell me – “NO ONE IS MORE IMPORTANT THAN YOU”. Obviously, I’ve made some changes recently, lifestyle wise, club wise, health wise and mindset wise and right now – I’m happy!

(It’s worth noting…. Tarik didn’t stop smiling at this point – sometimes, it’s not what you say, it’s the way you say it – his happiness was very evident)

So what have you done recently that’s so different?

TARIK: Well, you know what, I’ve learned to turn my phone off for a start. My little boy came up to me and was asking me to play and I was always saying, ‘Yeah, one-minute little man’ – ‘Daddy will play in 5 mins mate’… the guilt! I felt awful – you only get limited time on this earth and my little boy won’t be little forever – I had to turn that damn thing off.

Obviously, I’ve recently left Xion Gym, the club I helped build with my good mate Chris Duncan-Smith, I have a lot of love for that place, but I needed to just come away for a bit. There is a lot to do when you help run a club and with everything else going on in the background and with my new mindset, I just needed a break, never say never, I may return one day! Chris and I have been sparring partners for over a decade now and my respect for him is endless, we were friends long before Jiu-Jitsu and will continue to be that way, he’s like a brother to me. It’s just that right now – at this precise moment in time – I need to focus on me and my family. Jujitsu is a lifestyle – sure – but it isn’t my life. I need to spend time with the people I love and I want to roll wherever the winds take me.

I’ve been hanging out with my professor, Roberto Almeida, travelling up with him to Ray Stevens academy, where he coaches, on a weekly basis – little fun fact – both these guys are Olympic level Judokas and coach at the Budokwai, based in London – the oldest dojo in the UK – over 100 years old! Both Roberto and Ray are next level, real, actual athletes and their infinite knowledge of Judo has definitely helped my BJJ game. I’m a big fan of training in several martial arts, Judo and wrestling for example, definitely compliments the BJJ game and more to the point, just keeps things interesting, always learning!

I’ve travelled down to Andy Roberts BJJ – who’s been super cool about allowing me down to his club to train and I’ve been roaming to Winchester on a regular basis to a gig called Sub-Club – shout out Sub-Club! Those dudes are cool as sh**. You go down, and like old school randori – you just roll, no belt system, no politics, just come down and roll – its awesome!

Then I’ve changed my attitude to competition, I’m not putting myself under pressure to win, I’m just looking forward to being part of Battle Grapple, seeing where its going to take me. Have a ruck with Danny Lewis and if I win, hopefully, I’ll have 1 extra place to go train, if I lose… I’ll still (hopefully) have an extra place to go train. It’s cliché but – its all about the journey and who you meet. Not about the wins…it’s taken me a while, but with my father and uncle passing, it’s just made me realise how political BJJ can be and you know what, no one is more important than you. You wanna go roll with someone, you should be allowed too! It’s what makes meeting new people, learning new skills and literally turning it into a ‘Journey’ more fun! I just want to say on record, to everyone who has ever invited me to their gym and/or allowed me to train, learn and do some rolling, BIG LOVE! Thank you! It’s such a privilege to be able to go and mix with world renown names and with individuals who have such a high pedigree, I’m very lucky and feel truly blessed.

So – yeh…I’m happy bro, everything is good, including my newly fixed knees!!

Sounds like you’re having fun mate, So you’re training with Olympians, legends of BJJ – You’re definitely hanging out with some cool guys, who is your actual hero?

TARIK: well, my best mate is former light heavyweight Bellator champ – Liam McGeary, I flew out to see him and go train with him in New York, whilst I was there… dropped in to see Marcelo Garcia, that was awesome!

TARIK: but I don’t really have a hero…I love the way Roger Gracie, Marcus Almeida ‘Buchecha’ roll, I’m a big guy, so berimbolo, although I can do it… not really my thing, I love their old school BJJ style, from an attitude kind of way, I’m blessed to have Roberto Almeida, my chief and sensei at my side. That guy is straight up gangster, so cool, so calm, nothing is too much trouble. I went to the IBJJF Euros and people who I considered legends were coming up to him asking him for an autograph and a picture…it was crazy! He welcomes, newbies and respects the black belts, he is a true gentleman and kind of reminds me of my father in a way. A Gentleman, a good friend who will welcome anyone…but sh** on him… uh oh… !!

Cheers Tarik, well as always, I wish you nothing but the best of luck for Battle Grapple and thanks for meeting me – look forward to rolling with you again some day bro.

TARIK: Thanks Ads, always a pleasure.

It is worth noting, whilst sitting in one of his restaurants, he was interrupted several times by people who just wanted to say hi and he had an invite to another show…more on that for another day….