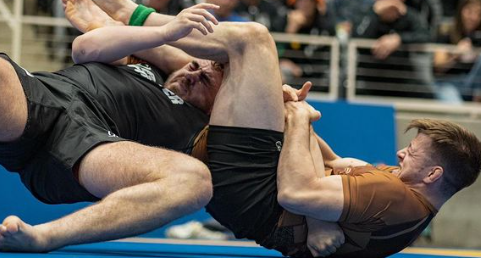 Jacob “The Hillbilly Hammer” Couch came into the 2022 IBJJF No-Gi Worlds as a significant favorite to do big things in his brown belt divisions. He did just that, taking home gold at heavyweight.

To make that accomplishment all the more memorable, Couch’s longtime coach Heath Pedigo awarded him his black belt on the podium.

Check out video of that promotion below.

Although Couch is now just hours into his black belt career, he is already a veteran of elite no-gi competition.

In September of last year, he burst onto the scene as a late-notice replacement at the Who’s Number One (WNO) championships where he scored upset victories over Roberto Jimenez and William Tackett. He continued that success in 2022, earning high-profile wins over David Garmo and Jay Rodriguez.

Known for his dangerous leg lock game, as well as his tricky closed guard, Couch is a homegrown talent under Pedigo, and has long been one of the Daisy Fresh team’s top representatives.

Now a black belt, Couch can look forward to competing on the IBJJF circuit alongside fellow elite grapplers.