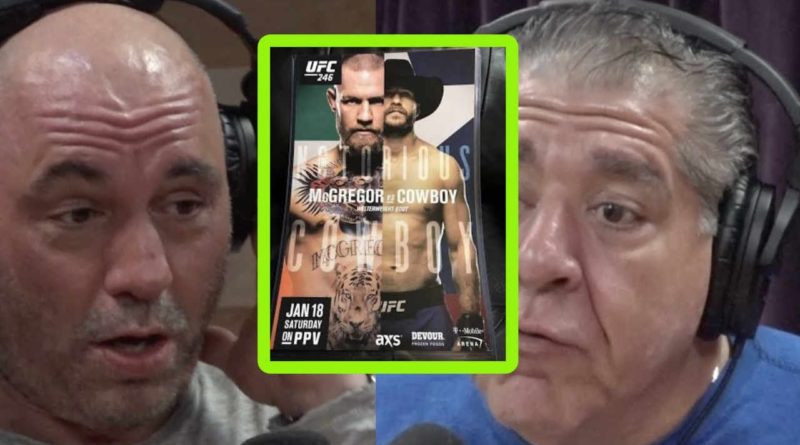 UFC 246: Mcgregor v Cerrone is finally upon us. As we go into the final days before the UFC’s first huge event of 2020, everybody is discussing how the main event fight will go down. UFC Commentator Joe Rogan is no exception and when fellow comedian Joey Diaz joined him on an episode of JRE, they couldn’t resist discussing the return of the UFC’s biggest star.

At around the 5 minute mark of the clip, Joey Diaz asks Rogan how he sees the fight going down and he explains it beautifully:

“It seems to me that Conor Mcgregor has an advantage in being able to close the distance and maybe a speed advantage. This is a perceived thing based on seeing them fight different people.” Said Rogan.

“Cowboy, when he’s at his best, is remarkably well-rounded and I think he’s more well-rounded than Conor. I think Cowboy has a lot of tools that people forget about, particularly his takedowns are excellent. Cowboy can submit the fuck out of you, he submits a lot of people. He’s nasty off his back, he’s got wicked triangles.”

“I could see Cowboy submitting Conor, I don’t think it’s impossible for Conor to submit Cowboy but I don’t see it. I think Conor can win by knockout, he’s very fast. His left is a fucking piston and he’s sneaky, he’s got nasty uppercuts and he’s got a killer instinct. When he has you hurt he fucking bombs on you and the Eddie Alvarez fight is the best example of that.”

Rogan also went on to explain how well Conor does under pressure, using his fight with Mayweather as an example. His final thoughts on the fight are something we’ve all wondered:

“I mean, we could certainly see a resurgence. The question has always been whether or not a rich man has the motivation to work like a poor man. And he’s a very rich man.”

Poignant thoughts from the voice of the UFC’s live broadcast.