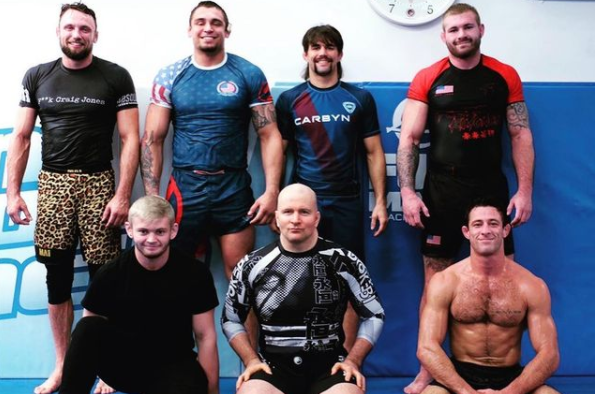 John Danaher and Craig Jones both recently discussed issues that led to the breakup of the Danaher Death Squad (DDS).

In 2021, top BJJ coach John Danaher announced that the team he led, the eponymous “Danaher Death Squad,” was splitting up. Shortly thereafter, core team members Craig Jones, Nicky Ryan, Nick Rodriguez, and Ethan Crelinsten opened up a gym — The B-Team — in Austin, TX. Around that same time, Danaher and his student Gordon Ryan started their own academy in Austin, New Wave Jiu-Jitsu.

Naturally, the cause of the DDS split has been the target of plenty of speculation. Despite a few trickles of information, all parties involved have been tight-lipped, choosing to keep matters private.

Recently, though, both Danaher and Jones made comments about the DDS breakup.

Danaher appeared on the Lex Fridman Podcast. View the full episode below:

According to Danaher, the team split was also, obviously, a split between brothers Gordon and Nicky Ryan:

“Not only was it a team breakup, but it was a family breakup, which is much more serious. I do believe that in time even the most intense family breakups can be reconciled and I also believe that once dialogue begins people will remember just how easy it is for us to get along and how tight we were for so many years. It’s so easy to let a minute of anger destroy 10 years of friendship.”

After the squad relocated from New York to Puerto Rico in 2020, tensions boiled to the surface and the two brothers struggled to share a training room:

“With everyone living in very close proximity to each other, any tensions got magnified because there was no relief from them… In particular, there was a family tension between two brothers which magnified over time. As time went by these tensions started increasing. It came to a point where it was difficult for them to be even in the training room together.”

Danaher wanted the team to stay together at least through the 2022 ADCC World Championships. But that didn’t happen. He says that Jones and company (he chooses not to name them specifically) “took” the gym they were planning to occupy:

“I believed that the team would be weakened by breaking apart, but that was rejected and the team split and they moved to Austin. We had made prior arrangements to go to a local gym and they took that gym and we were left with no gym and more or less homeless in Austin.”

Danaher also implies that certain squad members left him because they were unwilling to put in the work he asked of them. Again, he doesn’t name Jones specifically, but talk of being “incredibly good” but not “excellent” seems to be a thinly veiled reference to Jones and his self-deprecating “Second Place in Everything” moniker:

“It’s always a choice in life do. You can be the best you possibly can, or you can go around just get to enjoy life a little more or do other things. You know there’s more to life than just the inside of a gym and learning how to do a better heel hook or a better double leg. So, of course, you know, years go by, you want to try other things and you have to make this choice in life between extreme excellence versus being incredibly good, but maybe just enjoy my life a little more.”

Finally, Danaher points to ongoing conflict between squad members as a cause of the split:

“This is a sport where they have one gold medal per weight division. As guys get better, they’re going to be looking at their training partners and thinking like, ‘I’m gonna have to fight this guy one day.’ And they’re training next to each other. Of course, there’s going to be tension. There’s always going to be disagreements about, you know, what’s the right way to act around certain people, certain issues and people are going to come into conflict when everyone’s been programmed to be an alpha competitor.”

Craig Jones shares his side on DDS split

Jones, captain of the B-Team, also spoke about the DDS breakup. He appeared on the TFD Performance Podcast.

The two-time ADCC silver medalist had much less to say about the specifics of the underlying conflict, noting that he wasn’t personally involved:

“It’s probably not my story to tell. It doesn’t directly involve me as much as others.”

Jones did, however reference overall personality clashes as a cause for the split:

“Obviously there’s a completely different vibe between The B-Team and New Wave. I think that says a lot about why there are two teams today.”

Additionally, after Danaher’s appearance on the Lex Fridman Podcast, Jones responded in YouTube comments to his former coach’s accusations:

Jones has yet to provide any additional details (other than poking fun at the idea that he “stole” a gym).

In short, both Danaher and Jones seem to agree that there was an underlying conflict between the Ryan brothers. Understandably, neither of them want to discuss that. They both also appear to agree that there were personality clashes inside the training room that sped up the DDS split. Today, The B-Team and New Wave and their differing gym cultures reflect that split.

Danaher, though, adds more. According to him, Jones and The B-Team “took” the facility he had hoped to move into. Danaher also implies that certain squad members left his coaching because they were unwilling to put in the work to become “excellent.” Jones denies both of those accusations.