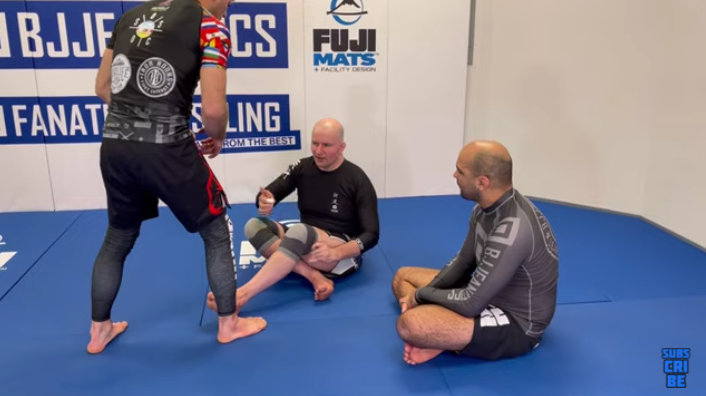 John Danaher can sometimes seem like an endless fount of knowledge. The leader and namesake of the feared Danaher Death Squad (DDS), his coaching and approach to jiu-jitsu has revolutionized grappling competition over the past several years. In a recent video with Bernardo Faria, Danaher detailed the DDS approach to what is arguably the team’s best overall position: open guard.

Check out the video below, which is full of insight on how the best no-gi grapplers in the world are trained to play open guard.

“What I wanted to do in this series was look at how I coach guard position to my students,” said Danaher.

The key to a good offensive guard is to first have excellent guard retention. You must first be able to hold the guard and prevent passes before you can launch attacks.

“If you don’t believe in your ability to recover from a failed attack from guard position, you won’t attack. You’ll find an excuse to hang back.”

Once a grappler has strong guard retention, he can attack confidently from his back, and Danaher emphasizes the importance of attacking and attacking often. Specifically, leg locks — a calling card of the DDS team — is where Danaher instructs his students to start their attacks. He does so not because leg locks can be easy to secure against inexperienced opponents, but rather because leg locks will always be available to attack.

“The legs can never be hidden by posture,” Danaher said. “The one part of the body that my opponent can never fully hide from me is the legs… You can always find a way to the legs. It creates a threat that your opponent simply cannot hide from.”

John Danaher is the coach to many of the world’s top no-gi grapplers, including Gordon Ryan, Nicky Ryan, Craig Jones, Garry Tonon, Nick Rodriguez, and Oliver Taza. The squad burst onto the scene around 2014 with major success in submission-only competitions, and has continued to find success at the highest levels of jiu-jitsu. Most recently, the team went undefeated at Who’s Number One, with Damien Anderson, Oliver Taza, Nicky Ryan, and Craig Jones all securing victories.