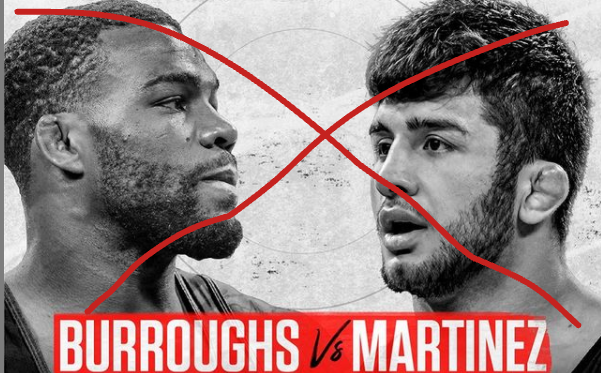 This Friday’s Who’s Number One has taken a big hit, as the co-main event wrestling match between Jordan Burroughs and Isaiah Martinez has been cancelled. According to FloWrestling, Martinez reported that he would be unable to make the contracted weight of 79 kilograms (174 pounds).

Jordan Burroughs and Isaiah Martinez are elite wrestlers with prodigious accomplishments. Burroughs was a 2012 Olympic gold medalist and a four-time world champion. Martinez was a two-time collegiate national champion from the University of Illinois, and is a two-time US Open champion.

This was to be the first-ever wrestling match on a Who’s Number One card; the door remains open for this match to happen at a future date.

According to Martinez, he expected Burroughs to accept the match at a higher weight, which he did not, meaning that Burroughs withdrew from the match, not Martinez.

Who’s Number One takes place on Friday, June 18 with a main event featuring Craig Jones vs. Tye Ruotolo. The event will be aired live on FloGrappling (subscription required).