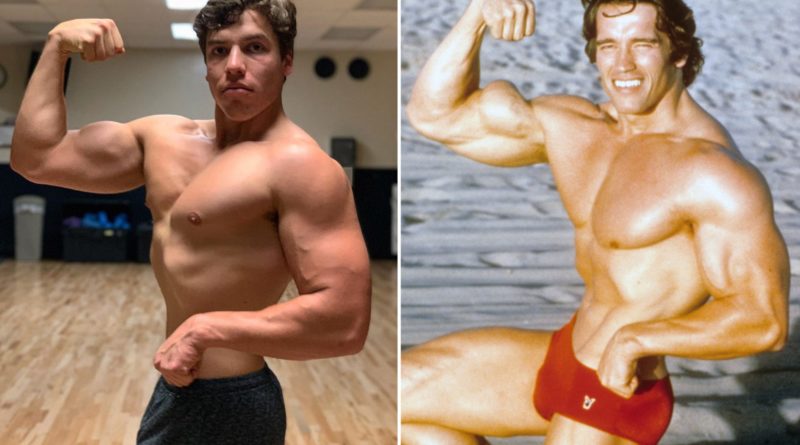 Arnold Schwarzenegger is easily the most recognizable bodybuilder of all time, so it’s no surprise that at least one of his children is considering following in the seven-time Mr. Olympia‘s footsteps. Schwarzenegger‘s fifth child, 23-year-old Joseph Baena, has decided to take on that challenge; no doubt he clearly inherited his dad’s looks and build. Baena started bodybuilding around the age of 20 years old, and his progress so far is pretty impressive. However, unlike his father he has decided to go down the BJJ route – a body builder/ BJJ athlete is a deadly combination. Joseph Baena is now on track to becoming both strong and good at choking people. His father has also always been a supporter of Brazilian Jiu-Jitsu and submission Wrestling. There were Arnold Grappling Invitationals back in the day all over the US.

This week, Baena posted an image of his training on Instagram. Here, he was styling out his new white belt and fresh gi, whilst training at Checkmat Northridge in LA. Joseph captioned the post, “It’s fun getting your ass kicked every once in a while! Excited to keep learning.” @projoe2

Checkmat Northridge is run by 2017 IBJJF No-Gi black belt World Champion Arnaldo Maidana, and BJJ brown belt Thomas Kocer so Baena will be in good hands. Fingers crossed that Baena continues his jiu-jitsu journey, though with arms like his, we feel bad for anyone who gets caught in between them.

If Joseph Baena gets to black belt, will that make him cooler than his Dad? Only time will tell. Good luck for the rest of your BJJ journey Joseph!

Lucy Wynne has 125 posts and counting. See all posts by Lucy Wynne