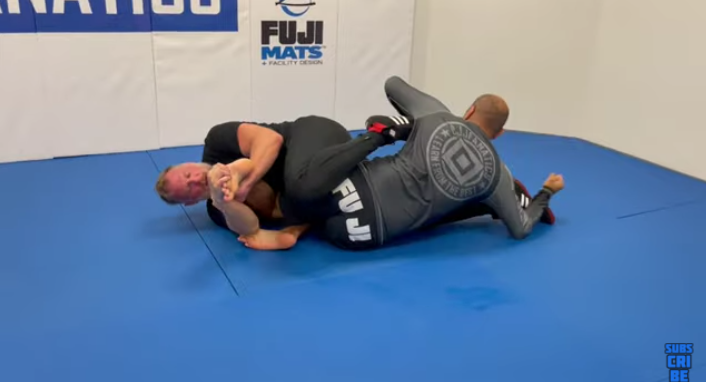 A longtime MMA veteran, Josh Barnett is known for his grappling and submission prowess. Because he is trained in both Brazilian jiu-jitsu and catch wrestling, he has a unique approach to grappling. As a part of the roll-out of his new toehold instructional on BJJ Fanatics, Barnett sat down with Bernardo Faria to demonstrate a surprise toehold from the north-south position.

Much of the technique’s success hinges on the element of surprise. From the north-south position, most opponents do not expect an attack on their legs.

“Let’s say I’m working for something and my opponent is really concerned with that upper-body attack,” explained Barnett. “Finding the neck is really difficult, I’m not really able to get much on his arms. He’s being super conservative up here. Chances are, the legs are gonna be bent and he’s not gonna be thinking about them.”

With his opponent unaware that a leg attack is coming, Barnett slides down the body to lock in a toehold. From there, he focuses on controlling his opponent and proper finishing mechanics.

“My job is to keep pummeling my legs until I can get a good secure lock on his hip enough that I can stay secured on the toehold.”

Again, Barnett emphasizes that this technique works best when the opponent is least expecting it.

“Especially with a lot of the old jiu-jitsu guys, they’re really cautious about their arms being caught up and looking for those chokes, they wouldn’t think you would go all the way down the legs, the body that way,” he said.

A professional MMA veteran since 1997, Josh Barnett sports a record of 35-8 with 19 wins by submission. He has competed in jiu-jitsu and submission grappling, with submission wins over Dean Lister and Ryron Gracie (by toehold).