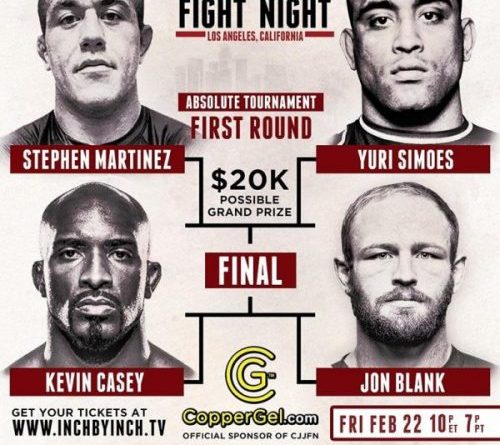 Combat Jiu-Jitsu Fight Night is in for yet another shake-up.

Josh Barnett is out, to be replaced by Stephen Martinez. This means the four-man absolute bracket will be Stephen Martinez vs. Yuri Simoes and Kevin Casey vs. Jon Blank.

The EBI Veteran, IBJJF No-gi World Champion, and Bellator Veteran Stephen Martinez will face Yuri Simoes, a two-time ADCC Champion. It is unclear as of yet why Josh Barnett, a UFC veteran who left the promotion in June 2018, has been dropped from the card.

This is not the first time card had been shaken, having been drastically changed when Gordon Ryan was forced out of his match by a complete tear of his LCL and bicep strain at KASAI Super Series. He had been expected to face Fabricio Werdum.

*Please note that these are as announced thus far on social media and as such may be subject to change.

Let’s all hope the absolute brackets have finally reached a fixed point, as the competitors have inside of a week left to prepare.