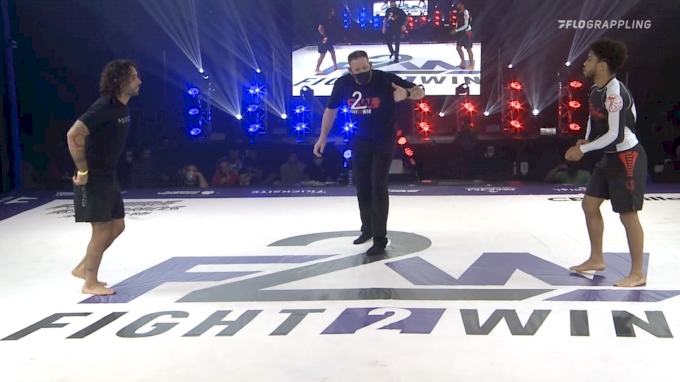 Fight 2 Win produced another great show over the weekend (November 7th) in Philadelphia. In the main event of F2W 156, Kennedy Maciel, who was the 2019 ADCC silver medalist and son of ADCC champion, Rubens Charles, took on the F2W undefeated featherweight champ, Junny Ocasio. Ocasio has not only been winning at F2W, he’s been finishing his opponents with submissions such as inverted triangles, inside heel hooks, z-locks and others.

However, things didn’t go his way when he found himself defending an arm bar from Maciel at around the five minute mark. After some high level guard play from Ocasio, Maciel secured “double unders” on his legs while trying to pass. This forced Ocasio to roll backwards landing in turtle guard. Maciel then locked a kimura grip before transitioning to an arm bar attempt. Ocasio stacked Maciel and for a few seconds it looked as if he were going to escape. “I thought I was good to get out,” said Ocasio. But as Ocasio postered up, Maciel found the extension he was looking for and forced Ocasio to tap.

“I expected a lot of pressure and movement from the bigger seasoned opponent,” Ocasio said when I asked his thoughts on the match. “I felt fine, just some small error or a little space left open. Maciel is a very amazing and respectful competitor. I look forward to competing against him again.” It was the first loss for Ocasio at F2W.

In the co-main event, Samuel Nagai (7-0 in F2W) took on Marcio Andre (4-3 in F2W) in a Gi match. Most of the match consisted of leg lock attempts from both. There was also crafty guard play from the spider web by Nagai. In the last 30 seconds both competitors were attacking toeholds and straight ankle locks simultaneously but were ultimately unsuccessful. Nagai won a unanimous decision, earning him his 7th victory at F2W.

We also saw a No Gi match between Sheliah Lindsey (2-1 in F2W) and Yani Reyes who made her F2W debut. From the start Lindsey came out quickly looking for a takedown. Her aggression paid off when she gained a body lock on Reyes and tripped her to the ground in a smooth transition to back control. She fought for a choke but Reyes did a good job of defending and eventually escaped to half guard. Lindsey had a tough time getting out of Reyes’ lockdown but finally scooped a leg and forced the saddle position. She attacked several deep ankle locks that looked as if a finish were near, but Reyes defended them all. The time eventually ran out but Reyes defended from the saddle for almost five minutes. The attempts by Lindsey garnered her a unanimous decision victory.

You can find the play by play of the main event and also the full results of the rest of the card here.