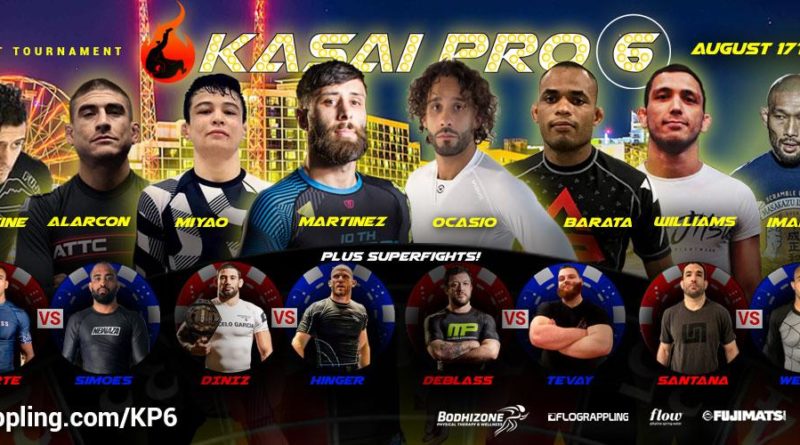 The KASAI franchise returns with KASAI Pro 6 on 17th August in Atlantic city. This event follows on the heels of a massively exciting KASAI pro 5, which saw incredible upsets in the form of Aaron “Tex” Johson submitting ADCC open weight champion Felipe Pena with a heel hook from 50/50, and Kaynan Duarte winning the Heavyweight Grand Prix, beating Craig Jones with a tight short choke from the back.

The round robin style of the Grand Prix returns for Kasai Pro 6, but this time at 135lb. Once again the tournament is full of intense grappling talent. Two of the biggest names are Joao Miyao and Geo Martinez. “Freakazoid” holds a win over Miyao, with Martinez taking the win on overtime rules in June 2019 at SUBVERSIV 2, and 3 time no-gi world champion Miyao will surely be hoping to avenge this loss.

The other fighters in the tournament are:

Duarte returns on KASAI pro 6 with a Heavyweight superfight against Yuri Simoes. The two will face off for the first time and Duarte will be looking to uphold his record on KASAI as the current 205lb belt holder.

The other superfights will be:

KASAI also put polls on their Instagram story on 7 August so fans could vote for their favourite to win each superfight and the results are as follows:

But don’t let this poll fool you! There could easily be an upset – we only need to look back to KASAI Pro 5, with Aaron Johnson’s heel-hook on favourite Felipe Pena. This promises to be an exciting event.