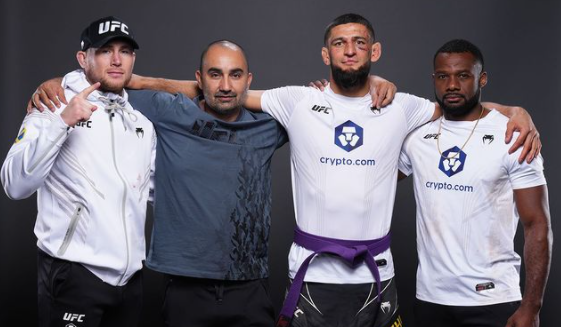 Fresh off his thrilling decision win over Gilbert Burns at UFC 273, Khamzat Chimaev’s star has never been brighter. Chimaev’s win not only improved his perfect professional record to 11-0 and netted him a Fight of the Night bonus, but it also resulted in a promotion to purple belt in BJJ.

After his win over Burns, Chimaev spoke to the assembled media with his newly-earned purple belt draped around his neck.

This means a lot for me because my coach, i worked with him for like five years. In five years I submitted a lot of guys… I fought three guys who have black belts… I took [Burns] down and he could submit me… I’m happy I get to get the belt. This means a lot to me because I work hard for that.

Although he is now just a brand new purple belt, Chimaev has already displayed elite-level grappling skills in his MMA fights. Of his 11 pro wins, four have come by way of submission, including his all-grappling domination of BJJ black belt Li Jingliang at UFC 267 last year.

An IBJJF gi and no-gi world champion, Gilbert Burns is the most accomplished grappler Chimaev has faced in his relatively young career. And while much of the fight took place on the feet, Chimaev showed, in his grappling exchanges with Burns, that he can grapple with the best welterweights on the planet.

With his win over the no. 2-ranked Burns, Chimaev may be next in line for a crack at UFC welterweight champion Kamaru Usman.