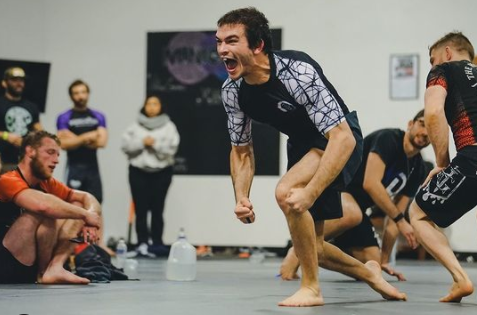 Kieran Kichuk was not expected to win the Emerald City Invitational (ECI). He earned his spot in the eight-man, $10,000 EBI-rules tournament by winning an ECI qualifier. Kichuk is an undeniably elite competitor, but against potential opponents like Gianni Grippo, Josh Cisneros, and Gabriel Sousa, he found himself as a serious underdog going into the ECI lightweight grand prix.

Using his own blend of submission-oriented attacks and seemingly inescapable back control, Kichuk shocked much of the grappling community that night, defeating Cisneros, Grippo, and, in the final, Adam Benayoun.

Kichuk recently appeared on the Open Guardcast and detailed his run through the ECI lightweight grand prix. He also spoke about his path in jiu-jitsu, training under Lloyd Irvin, as well as the upcoming ADCC West Coast Trials in which he will be competing.

Finding success in competition didn’t come easy to Kichuk. After winning blue belt Worlds as a juvenile, he didn’t make the podium of a major tournament for 10 years.

I got my a** kicked for the better part of a decade. That’s part of my identity and my jiu-jitsu You always see me, I got black eyes, I’m stitched up, I got bruises. People beat me up, but I don’t give up, I keep pushing forward…

Kichuk was a major underdog going into the ECI lightweight tournament. That was nothing new for him.

In terms of being an underdog, that’s always the case. I’m some skinny kid from Canada. Nobody ever respects my abilities, which is great. And this time around it was no different. On the betting odds I think I was the least likely to win.

In the first round, Kichuk squared off with elite black belt Josh Cisneros.

When I defended his attacks, I did my best to get offense going but I didn’t get anything meaningful done… I feel he had a lot of respect for my submission ability. He did a great job pushing the offense… I definitely did not win the regulation, I won in overtime… I can’t wait to run it back. He’s cool and I have a lot of respect for him. He’s a very good competitor.

In regulation I think I controlled the pace of the match completely… I got pretty deep on some attacks that I’ve been working on. Gianni is a world champion. I wasn’t able to follow through and finish but again, it’s nice to see how deep I got on my attacks. In overtime I hit a super slick sequence that I’ve been doing since blue belt, so that was cool.

I’m happy with how that match went. I think I got a little trigger shy because of the money… I went super hard at leg attacks at the beginning of the match. And my intention here, because I know his counter leg locking is good, I was trying to scare him and make him bring his upper body into play but he was having none of that… I controlled the match enough. I think if it was just a regulation, I still won that match. I ended up getting him in overtime.