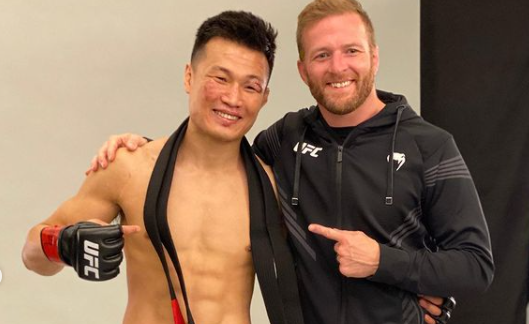 Chan Sung Jung, AKA “The Korean Zombie,” picked up a hard fought decision win over fellow featherweight contender Dan Ige in the main event of UFC on ESPN 25 on Saturday. Immediately following the win, Jung was awarded his black belt in Brazilian jiu-jitsu from his instructor, Santino Defranco.

Known for the durability that earned him the nickname “The Korean Zombie,” Jung is one of the most beloved fighters in MMA today. He had a pair of memorable fights with Leonard Garcia, the second of which he finished by twister, becoming the first fighter to land that submission in the UFC. Jung unsuccessfully fought for the UFC featherweight title in 2013, but with this win over Ige, he could find himself back in a title fight with just one or two more wins.

Jung leaned on his grappling at times to earn the nod over Ige. In both the third and fifth rounds, Jung used excellent back attacks to control Ige and threaten the rear-naked choke. With the win, Jung has now won three of his last four, with his only loss in that span coming to next featherweight title challenger, Brian Ortega.