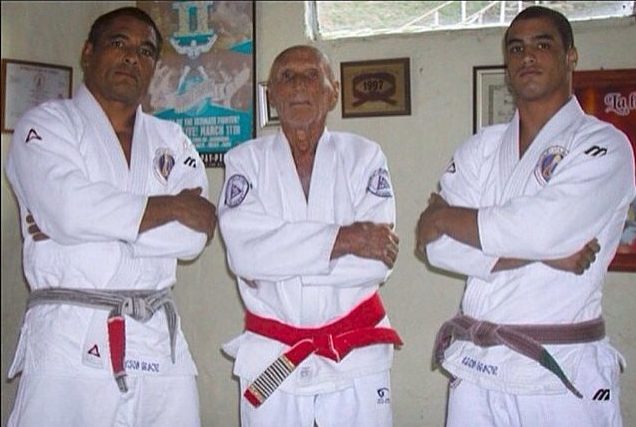 Some people fight for honor, others fight for money, but for a special few fighting isn’t a choice. For the men of the Gracie clan fighting is in their DNA; a burning desire to prove their style beats all and to live up to the expectations of their name.

First there was Helio, the diminutive face of the family, the Gracie champion before all others. His roll of defender of the arts saw him face all-comers in matches and legitimize Gracie jiu jitsu as a fighting art. Age conquered Helio, as it does everybody, and Carlson Sr. carried the mantle for the family and defended its honor until Rolls stepped in from his shadows. Rolls Gracie was by all accounts, one of the greatest grapplers ever and a revolutionary, but he died in a hang gliding accident at just 31 years of age. Rolls death left a void, there was no longer a Gracie family champion, but that was about to change.

When it comes to combat sports, there is a tendency to sully the waters of reality with fantasy. Commentators like to romanticize achievements and create untouchable heroes, but Rickson Gracie is the exception, his role as the Gracie family champion is one that justifies all its acclaim.

Rickson Gracie was the champion that Gracie jiu jitsu needed. Following on from Rolls’ lead, Rickson’s open mind lead to him amalgamating a myriad of other grappling sport’s techniques with Gracie jiu jitsu. Rickson wrestled, Rickson did judo and he did Sambo. Rickson was not a slave to dogma and pushed the art to the next level while incorporating yoga, breathing exercises and health and well-being protocols into the sport.

Western fight fans regularly point to Royce Gracie as the reason they got into MMA and in turn, how they stumbled across BJJ. While Royce’s achievements are stellar, there is no doubting that Rickson was the top of the Gracie food chain and this has been corroborated by many witnesses, who have stated that Rickson was untouchable by his family members on the mats.

While Royce was entertaining fans in the west, Rickson was creating a legacy in the east. As the face of Pride Fighting Championship, Rickson Gracie was elevated to a hero by the Japanese masses. Rickson was the spirit of bushido personified and throughout his unbeaten MMA career, he created a untouchable legacy.

Time conquers all men and the once bright lights of Rickson’s career dimmed and with it so too did the allure of the Gracie name. The UFC, a creation to showcase the Gracie family dominance, grew and with it so to did MMA as a separate entity. No longer was Brazilian jiu jitsu enough to win fights on its own and as MMA developed, the art of jiu jitsu was relegated to the periphery.

In the years since the Gracie family dominated MMA there has been a number of members who have tried to emulate Rickson’s success. Rolles and Roger both fought in the UFC, but neither could rise to the upper echelons of the sport’s premier organisation, but on Sunday night a new contender will enter the Octagon and look the rejuvenate the Gracie name.

Kron Gracie is every bit the man his father is. Kron is a visionary, but also respects the sanctity of his art. From an early age, it has been clear that Kron has been groomed to become the culmination of Rickson’s vast grappling knowledge and in his 2013 ADCC gold medal run, Kron’s talents were on full display. Over the course of a weekend in China, Kron submitted JT Torres, Garry Tonon and two others in a dominant display.

After ADCC, Kron had reached the pinnacle in submission grappling and true to form, he decided to set his heart on emulating his father’s success and moved towards a transition to mixed martial arts.

Like his father, Kron’s MMA foray took him to Japan where he dominated, but there was no fanfare. The world of MMA has changed immensely since the days of Rickson and now the sad reality is that unless you are in the UFC, you are not capable of owning the label of the best fighter in the world.

Kron’s 4-fight run in Japan was impressive yet unremarkable. Kron garnered an unbeaten record, but apart from his victory over Tatsuya Kawajiri, none of his performances were truly awe inspiring. After a two-and-a-half year absence from the ring, it looked like Kron’s MMA journey was over, but a shock announcement of a UFC contract brought Kron’s path to the top back into focus.

Alex Caceres is a great martial artist. While his MMA record might seem mediocre from the outside, Caceres has the capability to put on amazing fights and he is the biggest test of Kron’s career to date. Kron has the ability to submit anybody on the world on any given day, but this fight is no certainty for the Brazilian.

The weight of the Gracie name is a burden that many have struggled to carry and the shadow of Rickson is difficult to escape, but Kron Gracie has the potential. On Sunday night, the Gracie family might be able to crown its new champion and the tenure of Kron Gracie might just begin.

admin has 113 posts and counting. See all posts by admin