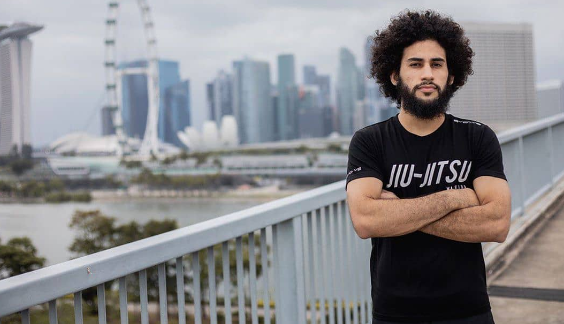 Ahead of his submission grappling match against Ruslan Badgasarian at ONE 161, Rodrigo Marello spoke to Grappling Insider about his mother’s influence as his first jiu-jitsu instructor.

For Rodrigo Marello, jiu-jitsu runs in the family.

“I would say that my childhood was perfect,” the Liga Jiu-Jitsu black belt told Grappling Insider.

On Thursday at ONE 161, Marello will officially join ONE Championship’s rapidly-growing submission grappling division when he takes on Sambo world champion Ruslan Bagdasarian. Both men will be making their promotional debuts.

As he heads into this globally televised match, Marello will naturally lean on everything he has learned in competition and from various instructors over the years. But perhaps more than anything else, the Brazilian will rely on the teachings of his very first instructor – this mother.

“My mother started training jiu-jitsu when she was 40-years old,” he said. “After 10 years of training she became a black belt and started a social project for underprivileged children in my neighborhood.”

Training on mats in his garage, Marello took quickly to jiu-jitsu.

While some youngsters might be pushed away from the martial art with an overbearing parent-coach, Marello is quick to credit his mother for finding the balance between love and discipline.

“My mother is a teacher who teaches everything she knows with a lot of love, and is firm and rigid whenever necessary, always maintaining good discipline on the mat and trying to help in the best way possible in the training and education of children.”

Marello considers himself an attack-oriented guard player, and he plans to play from his back against the Sambo stylist Bagdasarian.

Of course, Marello will utilize techniques taught to him by his mother. But beyond sweeps and submissions, the São Paulo native says he learned much, much more than just jiu-jitsu on those mats in his garage.

“In addition to having learned discipline and my Jiu-Jitsu background from her, the most important thing she taught me was dedication and willpower,” Marello added. “I learned that through her example and they certainly make a big difference in my career. Every time I think about missing a training I remember all the effort she made to train and all the effort and dedication she put into each training session.”

How to watch: ONE 161 takes place on Thursday, September 29 and will air live in North America on ONE’s YouTube channel beginning at 6 AM ET.